Slamming the government war panel report as a ‘whitewash,’ international human rights watchdogs have re-iterated their call for an international inquiry into the alleged war crimes inSri Lanka. The Lessons Learnt and Reconciliation (LLRC) in its report has concluded that the security forces did not deliberately target civilians in the last stages of the war against the Tamil Tigers. The report has, however, accused the LTTE of gross human rights violations. 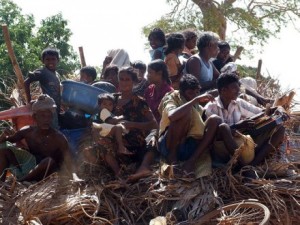 panel is “biased” and it’s report has failed to address violations of international law.

“Whitewash’: He has urged Sri Lanka to address issues raised in LLRC report and report to the UN Human Rights Council at its next session. “The LLRC has admitted its own inability to establish the facts about the conduct of the fighting, and points out legal complexities beyond its abilities. This is why the international community must now follow up with an investigation, bringing to bear the full resources and assistance of the UN and the international community,” Sam Zarifi said.

The Human Rights Watch (HRW), which refused to appear before the LLRC together with the AI and International Crisis Group (ICG), agrees.

The long awaited report has provided “little new information” on accountability, it said. “Governments and UN bodies have held back for the past 18 months to allow the Sri Lankan commission to make progress on accountability,” said Brad Adams,Asia director at Human Rights Watch. The HRW added that the “failure” of the LLRC to investigate and prosecute wartime perpetrators shows the “dire need” for an international investigation. However, Mr Adams said it is important that the LLRC has dismissed the government’s “bizarre claims” that no civilian casualties were caused by the security forces. “It is clear that justice for conflict-related abuses is not going to happen within Sri Lanka’s domestic institutions,” Adams said.Military “to be withdrawn”: “The government has been playing for time by appointing the LLRC. That time has now run out.” But the government has pledged action based on the report. Tabling the report in parliament, Leader of the House Nimal Siripala de Silva said the security forces would be withdrawn from all aspects of community life. The security forces will disembark themselves from civil administration, and, in particular, from participation in any decision making in respect of land issues.

UK based Sri Lanka Campaign for peace and justice, has described the report as a “whitewash.” It’s campaign director Fred Carver said the outcome of the report was not a surprise as a result f the “flawed methodology” of the panel. “Victims of the serious rights abuses committed by both sides will feel let down,” he said.