In retrospect we can say that the LTTE high command made a serious error when they launched Eelam War IV through the Mavil Aru incident in July 2006. On this occasion they could not replicate the massive successes of Eelam War III (see Appendix I). By mid-2007 they had lost control of the patches of terrain they had held in the Eastern Province. By early 2008 they lost control of the north western coastline and their logistical supply chain from India. Outgunned, outnumbered and on the back-foot, they nevertheless fought tenaciously and cleverly as a threefold pincer of SL Army battalions gnawed away at their defences from west, south and north (Map 1). 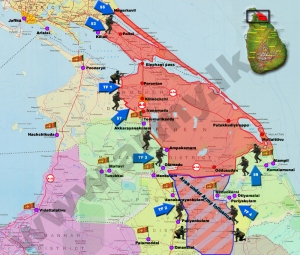 From 2008 they encouraged and marshalled their citizens to move lock stock and barrel well ahead of the battle lines (see Figs. 2 & 3). By the end of December, however, the SL Army was knocking on their doorstep at Kilinochchi, their administrative HQ, and about to gain control of the arterial A9 road that linked Elephant Pass to the Vavuniya area. This meant that their peoples, perhaps some 300,000 remaining now (exclusive of the 20-35,000 that may have constituted the pool of Liberation Tiger personnel) were hemmed in within what can be called the “Vanni Pocket” to the east of the A9 (see Map 1). 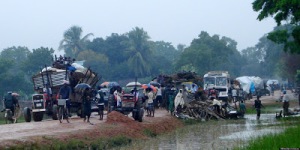 The people are said to have participated in this eastward exodus with relative equanimity because they had little trust in the government of Sri Lanka and its forces and were attached to, and dependent upon, the LTTE in various ways.[i] Such acquiescence dwindled, however, as the discomfort increased and the Tiger machinery of conscription spread its screws. Muralidhar Reddy had been visiting the rear frontlines from October courtesy of the SL Army and he reckoned that segments of the Tamil population began to lose faith in the Liberation Tiger cause from around January.[ii] This reading was quite independently and unequivocally supported in November 2011 by a Tamil activist who had been part of the entrapped populace till May and escaped with his family to the Jaffna Peninsula by fishing boat during the last weeks of the war.[iii]

The trickle of escaping/fleeing Tamil peoples increased from 3,484 in January to 31,694 in the course of February.[iv] Their flight was usually at night and quite perilous. 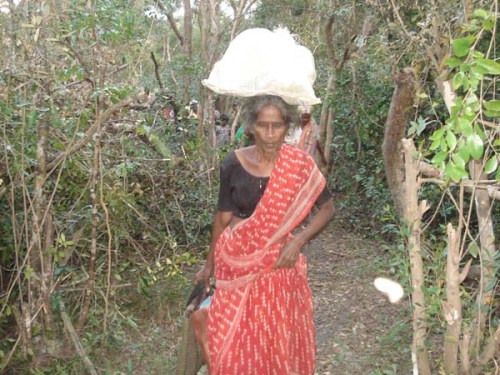 Fig 4. Escapee civilians in February  — from a  Ministry of Defence source …

There was the ever present danger of venomous snake-bite[v] in the dry zone bush and jungle (see Figs. 24& 5).  A considerable number were shot and killed by the Tigers seeking to deter such moves;[vi] while, on other occasions, fleeing Tamils faced the danger of being caught in crossfire because the Liberation Tigers adhered to their infantry tactics of defense through attack – utilising the fleeing civilians as a path of infiltration across SL Army lines to hit the latter from flank or rear. Indeed, De Silva-Ranasinghe stresses that there were four major counterattacks mounted by the LTTE in the first few months of 2009 that posed major problems for the Sri Lankan army in circumstances where the fleeing Tamil civilians posed “a security nightmare” for the Army’s frontline troops.[vii]

Outcome: Be that as it may, the consequence of the Liberation Tiger strategy of deploying its citizenry as a ransom ploy and pool of labour was the squashing together of some 300-320,000 people in the area identified here as the “Vanni Pocket” in January 2009 (see Map 1). As they lost some sections of this space in the course of January and in order to thwart any amphibious landing on the eastern coast which would box them in and make escape (through the international aid they were seeking and expecting: Jeyaraj 2011:29-32) impossible, the Tiger command began assembling their people along the coastal belt between the elongated series of lagoons known as Nandikadal and the sea. It was this area that the Sri Lankan government decreed to be a “No Fire Zone” on 11th February 2009 as a sop to pressure from the UN, the Western powers and powerful INGO lobbies (see Map 2).

The further outcome was the tighter hemming in of the mass of Tamil people. One could say that the remaining Tamil citizens of Thamililam were now “a congealed mass” and denizens of a tent-and-shack city between lagoon and coastal waterline (see Figures below). One survivor, the aforesaid activist, summarized their situation pungently: his family was one part of the largest latrine in the world (see fn. 3).

But words fail do they not in such circumstances? That is why visual images must come to our rescue. The plight of these Tamil peoples, pawns as ever in a heartless LTTE strategy of grand blackmail, nothing less than meat in the picture of “impending humanitarian crisis” that was being paraded before a gullible Western world, can only be comprehended visually. That comprehension, needless to say, can only be in weak measure – without any experiential grounding unless one has been one of the fortunate Tamils who survived this process (as some 295,000 did). 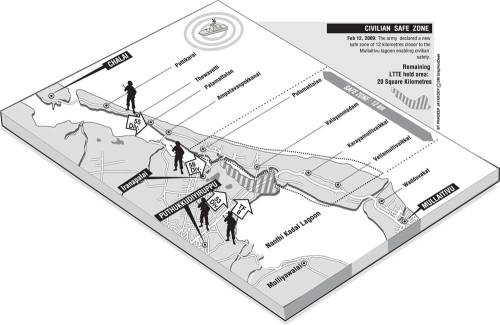 Central to my argument here are two spatial concepts: (a) the “Vanni Pocket,” identifying the area into which the Liberation Tiger forces and weaponry, plus the mass of people held hostage as ransom/blackmail tool, were compressed by January 2009 (see Map 1); and (b) the “Last Redoubt,” or the aforesaid coastal strip of 13 by 4 square kilometres, within which the civilians were mostly crammed by mid-late February 2009 – an area where the Sea Tigers were based and where they were eventually joined during the course of March and April by the LTTE’s surviving infantry and artillery units as well as Pirapahāran and his command HQ. Within this limited strip of coast it is also useful for one to ingest the names of the named localities running north to south: viz., Palamattalan, Ampalavanpokkanai, Putumattalan, Valayanmadan, Karayamullivaikkal, Vellamulliviakkal and Wadduvakkal (see Map 2). This is because the SL army penetrated the zone on the night of the 19th/20th April and enabled the escape of thousands (see Appendix V) so that the remaining mass of Tamil civilians, perhaps the most obdurate Tiger loyalists, were confined to a tiny one by four km area in the south at Karayamullivaikkal, Vellamulliviakkal and Wadduvakkal – from where they seem to have anticipated a miraculous international rescue operation.

Because the Liberation Tiger directorate was seeking international intervention, it is from their official web site, namely, TamilNet, that I have derived most of the images paraded below. Their empirical foundation and truth-value is enhanced for this reason. I proceed in temporal order, but on some occasions I have not been able to ascertain a date and encourage readers to send me precise information if they are able to do so. 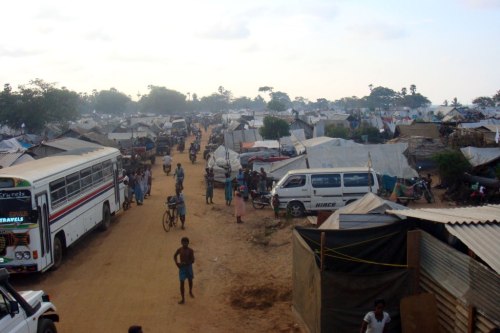 Fig 9: Congestion along the main road at Ampalavanpokkanai — from TamilNet, 29 March 2009

Fig 10: Ampalavanpokkanai, 16 April 2009 — Pic from TamilNet, 16 April 2009. Note that Citizen Silva reckons that the approximate total for the number of people in the LTTE corral in mid-April 2009 was about 246,000. That the congestion in the main localities was severe is manifest. 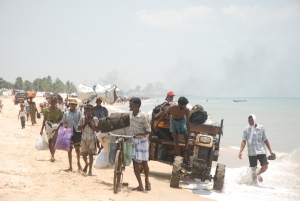 Fig 11 & 12: Some people move south from the northern segment after the SL Army penetrated and occupied that part of the Last Redoubt in late April – Pic from TamilNet. 1 May 2009 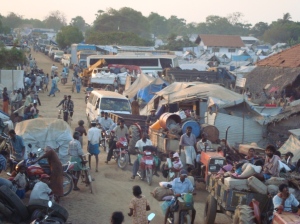 Fig. 13 & 14: Increased Congestion in the Karayaimullivaikkal and Vellamullivaikkal areas in May 2009 — Pic from TamilNet. 1 May 2009

Fig 15: This image is particularly significant because of the cluster of undamaged red-roofed houses in the distance. All such buildings would have been new constructions after the tsunami of 2004 had devastated the area. So, this locality had not seen heavy bombardment thus far. – Pic from TamilNet. 1 May 2009 where the image is described as a “Close-up view of congested road in Mu’l’li-vaaykkal”

Fig 14:  Pic of a crowded locality in the Last Redoubt marked by the SL military authorities for propaganda purposes — Pic supplied by Victor Ivan

De Silva-Ranasinghe, Sergei 2010b “Information Warfare and the Endgame of the Civil War,” Asia-Pacific Defence Reporter, May 2010 30/4: 35-37….  http://www.asiapacificdefencereporter. com/articles/40/Sri-Lanka.

Roberts, Michael 2012c “The Disappeared in Sri Lanka’s War in the Recent Past: What is missing in those “Missing”? 27 May, 2012, http://groundviews.org/2012/05/27/the-disappeared-in-sri-lankas-war-in-the-recent-past-what-is-missing-in-those-missing/

[ii] Opinion conveyed during several conversations in Colombo in April/May 2009 after he approached me to pen essays for Frontline. For data on foreign and local reporters airlifted to the frontlines, see http://www.scribd.com/doc/185693507/SL-ARMY-Media-Accreditation-to-War-Zone-2007-2009.

[iii] This opinion was conveyed during the course of several interviews in Jaffna town in November 2012. Note that XY was as severely critical of the government of Sri Lanka as he was of the LTTE so his name cannot be revealed.  His family was part of a small flotilla of boats that moved northward at night. He suspected that some of the individuals on his boat were Tiger personnel.

[iv] Details sent by email by a Ministry of Defence source.

[vi] “The overwhelming reports from IDPs indicate that more people attempting to flee have been killed by the LTTE than by army snipers” (Rajan Hoole of UTHR as quoted in De Silva-Ranasinghe,”Information Warfare,” 2010: 37).

12 responses to “Congestion in the “Vanni Pocket,” January-May 2009: Appendix IV for “BBC Blind””