After the Battles: Tammita-Delgoda’s Images from the War Theatre

As indicated in a previous note within this domain, I keep finding new empirical data on the last phase of Eelam War IV even though I have addressed the topic for over five years. The series of items from SinhaRaja Tammita-Delgoda included in THUPPAHI this week, as well as the biographical note that supplements the evidence of the essays by detailing his experiential background and training, are part of a process designed to provide readers with critical new material — one launched in July 2014 with an article by Daya Gamage and the first round of distilled copies of despatches from the US Embassy released to the world by Wikileaks.

Any comprehension of the intricacies of Eelam War IV is not feasible without careful attention to cartographical imagery of the evolving battle theatre and pictorial evidence. That is why I have devoted considerable space to pictorial data in Tamil Person and State: Pictorial (2014). Photographs are, to be sure, fragmentary pieces of data. They can be tweaked and manipulated by Photo-shop and other modern devices. They can also be deployed selectively as I have demonstrated in addressing instances of misuse by Rosie DiManno and Gordon Weiss in my essay “Visual Imagery within Political Struggles and Manoeuvres” in the book referred to above (2014: 1-44).

Images were an integral aspect of the propaganda war that prevailed in 2008 and 2009. Thereafter, of course, video evidence by pro-Tamil agencies heightened the propaganda battles. So our study and use of images must move as carefully as our steps in deciphering written or oral evidence.

While Tammita-Delgoda incorporated some of his camera-work in the outstanding study, Sri Lanka. The Last Phase in Eelam War IV. From Chundikulam to Pudumattalan which was printed by the Centre for Land Warfare Studies in New Delhi (also known as Manekshaw Paper No. 13) , he has more pictorial data. With his cooperation I present some of these pictures, beginning with some of those in the Land Warfare Studies monograph and continuing with others. Obviously this body of data must be juxtaposed besides the wide range of images marshalled in many quarters, including the following:

One must also, of course, incorporate the Channel Four video footage and those presented by Tamil sources as well as the video developed more recently (and belatedly) by Daniel Ridicki and those composed by the Government of Sri Lanka, such as “The Last Phase.”

It was not till this last week that I chanced upon the documentary, pictorial and video campaign sustained by the Mawbima site, viz, http://mawbima.blogspot.com.au. As the nomenclature, “Motherland,” indicates, this is a GSL propaganda machine. It includes re-runs of video TV documentary presentations from the war front by Rupavahini and Derana TV stations. My previous writings could be criticised for the failure to engage this source within a context where I utilised the imagery and text drawn from TamilNet quite extensively.

tree bunker: “Behind the entrenchments guarding the lagoon was a patch of open land. In the midst of this expanse was a thicket…. A tangled mass of branches, thorns and bushes, it was so thick at times that you could hardly put your hand in. Inside were bits of clothing, discarded wrappers, tins and empty bottles. It was a perfectly concealed defence point, commanding the open ground.84 Designed to catch those coming through the scrub unawares, it reflected the combination of careful thinking with a painstaking use of the terrain which characterised the LTTE. The cadre who held this point could not be seen from the outside and the bush acted like an invisible bunker. Anyone coming through into the clearing relaxed momentarily, for all he could see was just another thicket.85 Brilliantly conceived, it was a perfect utilisation of two of the principles of defence – surprise and concealment. Even when the attacker did recognise it for what it was, the approach was far from easy, for the ground in front of the thicket was set with mines” — quotation from Manekshaw Paper Sri Lanka: The Last Phase in Eelam War  … being Mankeshaw Paper 13

“The most striking thing about those fortifications was the tremendous ingenuity which had been exercised. Although the resources might have been limited, the thinking behind them was careful and imaginative…………The main raw material was the palmyrah tree, which was utilised in almost every conceivable way: its leaves, its trunk and sometimes even the tree itself. In some places where there were not enough palmyrah logs to shore up the bunkers, boats were also used as a foundation. Positioned underneath the palmyrah logs, they added strength to the roof, which was thickly covered with sand to deaden the effect of the shelling. This ensured that the structure would not collapse under the weight of the sand.” 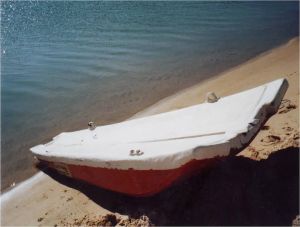 teppan … “Using teppan, the light dug-out canoes favoured by the fishermen, the government troops began building a bridge across the mouth of the lagoon. The assault was spearheaded by the special forces, who crossed in boats. Landing on the other side, they provided cover to the men behind them. Two engineers with T-56 rifles went first, getting down into the current. Two teppans at a time were placed in the water, then another two. With the waves swirling around their shoulders, the engineers carried on lashing the sections together, two by two.”- Extracted from Manekshaw Paper 13.

Pontoon Bridge of across Chundikulam Lagoon defences ….. “Within a few days, the surging current had swept away the teppan bridge and a new one had to be constructed. This time, they used fishing boats, but this too was washed away and another pontoon bridge was constructed. This structure, however, managed to survive — Extracted from Manekshaw Paper 13.

“Within a few days, the surging current had swept away the teppan bridge and a new one had to be constructed. This time, they used fishing boats, but this too was washed away and another pontoon bridge was constructed. This structure, however, managed to survive.” Extracted from Manekshaw Paper 13

ditches and trenches as LTTE defence 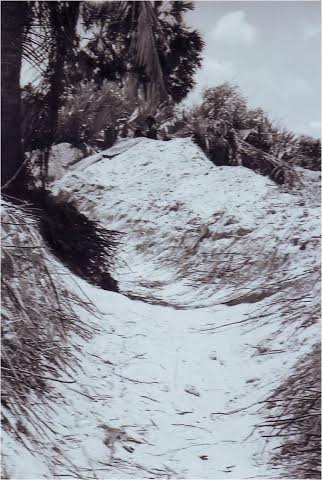 …”Many of these lines were also linked to subsidiary trenches in the rear. They extended back into a whole series of supporting trenches, points, shelters and sub-positions. These contained first aid , artillery shelters and bunkers, often as not leading to the next bund.” 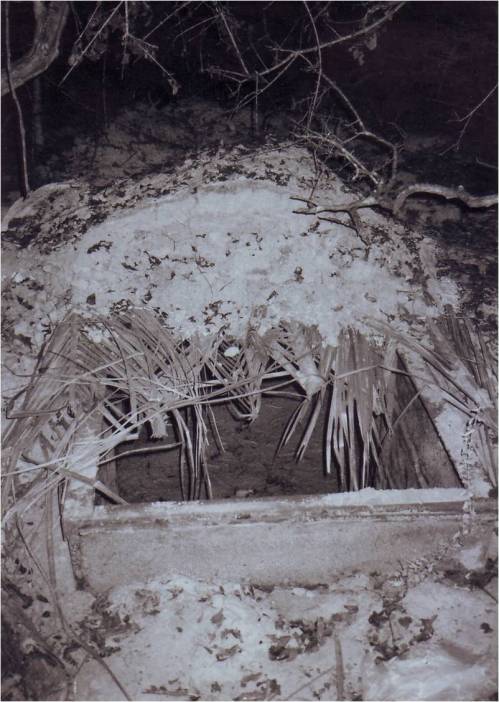 “In sharp contrast to those constructed by the army, most of the LTTE bunkers and trenches blended into the sandy environment….…. Some of these bunkers were little more than single manholes, carefully calculated to combat the way artillery shells fell. To add further protection, the inside of the hole was plated with strips of iron, creating a tiny armoured bunker. It was, in effect, a metal-plated box buried in the sand, with eight inches of metal plating above the surface. The top was covered with a layer of coconut fronds mixed with sand, making it almost invisible from the outside. When the artillery rounds began, the cadres would jump into these pits. Four and a half feet to five feet deep, they were so small they could only be destroyed if a shell actually fell into the hole.

These defences proved to be extremely effective. “You don’t know where they are, and you can’t even see them until you are right on top of them [said a soldier]”

“Once the artillery barrage was over, the cadres emerged unscathed to fire at the advancing troops. With that type of bunker, the trajectory was so low that it was very difficult to gauge the direction of fire, let alone see it during the day-time. As long as the cadre remained where he was, he was almost invisible. As a result of defences like these, a number of troops sustained leg injuries. Nearly all of them were totally unexpected; “The first you know is when you are wounded in the leg.”82 The only thing that they could do was to crawl as close as possible, hoping that they would not touch a trip wire. All they did was to fire towards the sound, threw grenades and send off RPGs in the general direction. Only at night, when the fire flashes could be seen, did the troops have any idea of where the bunker was.”

“It was an infantry theatre, involving sand and water. Tracked and transport vehicles tended to plough into the sand and were constantly getting stuck. Even the tractors and their trolleys could only travel along lines of tin sheets laid out across the sand. These sheets had been cut from tin water barrels and used to create an impromptu road over the dunes.” Extracted from Manekshaw Paper 13. 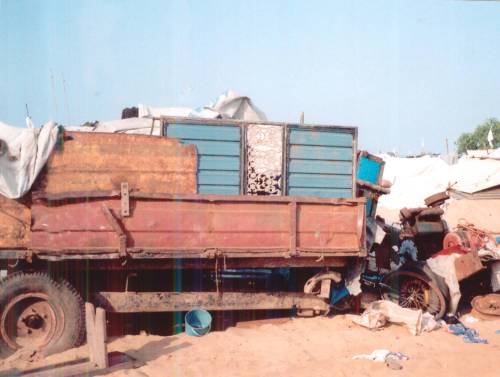 “Everywhere you turned there were bunkers, like the grenades, they were rough and ready made. Even a stranded lorry had a purpose. Wedged into the sand, its undercarriage had been removed and the ground beneath carved out. Ingenious and unusual, as a strongpoint it was as good as any. …………….Inside, tents and huts were lined with woven mats or paduru. The well to do even had carpets. Many of them were fully equipped, with beds, tables, desks, chairs and even cupboards. Some had vanity units complete with mirrors. On the back of a lorry was a large front gate. Adorned with wrought iron grill in the shape of a flowering scroll, it must have been expensive. Marooned in the sand was someone’s sewing machine. Worked by pedals, this one still had pieces of cloth fluttering from it, clearly it was still in use.

People flying in fear of their lives only have the clothes on their backs. Taking as much food and water as they could carry, they snatch up their jewellery perhaps and all the money they have. We had been told that the LTTE had forced their people from their homes. Yet they had time to bring their possessions.” = Extracted from  “The Sari Bunkers of Pudumatalan“. Unpublished Mss by SinhaRaja Tammita-Delgoda. 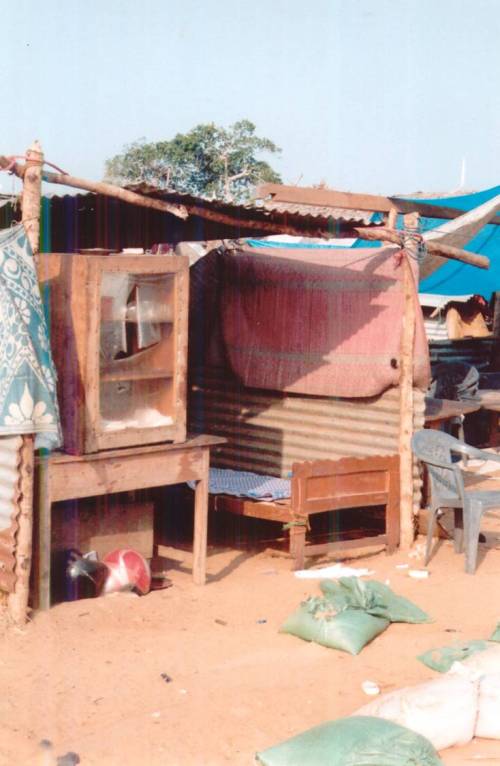 Thuppahi NOTE: In response to a query Tammita-Delgoda informed me (email, 1 October 2014) that he spent three days at the battle front with the 55th division from 29 to 31 March… and the Mankeshaw paper was based on this particular experience of embedded observation.

5 responses to “After the Battles: Tammita-Delgoda’s Images from the War Theatre”