A Puzzle: When Weiss, Amnesty International and Aussie Greens LIE

Michael Roberts, courtesy of Colombo Telegraph, where the title is  “Moral Crusader Journeys into Duplicity”

Today’s world in the West is marked by currents of secular fundamentalism mounting campaigns against paedophiles, smoking, corruption and “crimes against humanity”.  The humanitarian campaign directed at war crimes has on occasions promoted a strange phenomenon: where people of ethical stance indulge in outright lies as well as the massaging of facts. When Amnesty International, the Public Interest Advocacy Centre (Sydney) and such moral crusaders as Gordon Weiss descend to such duplicity, the world must surely take note. 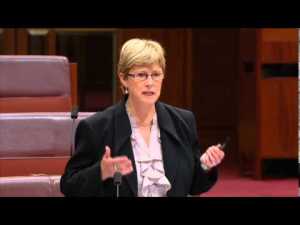 The Australian media-man Gordon Weiss is the epitome of a moral crusader. Of Polish Jewish ancestry, it is likely that his leanings are coloured by the horrors inflicted on the Jews in Europe during the first half of the 20th century. His presentation of self within his own web site, his intense demeanour when fronting the public on TV cameras or stage and his campaign against the government of Sri Lanka (GSL) stand as testimony to the stance “crusader for truth.”

He was the Media Officer for the United Nations and located in Colombo during the last phase of the Eelam War IV. In early May 2009, assisted by his friendship with Ravi Nessman of Associated Press, he went on world air through AP to assert that a “bloodbath” was about to unfold in the north-eastern war zone. This presentation was part of a campaign led by USA to force the government of Sri Lanka (GSL) to arrest its military operations so that the Western cabal could (a) save the Tamil civilians and (b) whisk the LTTE leadership to Eritrea, South Africa or East Timor. Witness the public statement by Under-Secretary of State Michael Owens in Washington at about the same time, the scathing attack on GSL by Hilary Clinton on 22nd April 2009, KP’s revelations to Jeyaraj (2011) and Salter’s To End a Civil War (2015).

Weiss in his own presentation of self-Pic 2 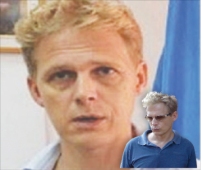 The public interventions by Clinton, Nessman and Weiss are revealing because they occurred after the SL Army special forces penetrated the “Last Redoubt” of the Tigers on the eastern coastal strip abutting Nandhi Kadal Lagoon (NKL) in a remarkable operation launched on the 18th/19th night in April, “one of the most fascinating surgical military operations ever undertaken” according to Shashikumar, an Indian defence analyst. Between the 19th and 23rd April some 103,000 Tamil civilians and Tiger fighters who had discarded their weapons streamed across the NKL to safety in government terrain (Pics 3, 4, 5 & Map 6). 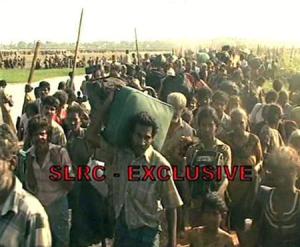 A video grab shows thousands of people the military said fled an area held controlled by the Tamil Tiger separatists in northeastern Sri Lanka on April 20, 2009. REUTERS/SLRC via Reuters TV 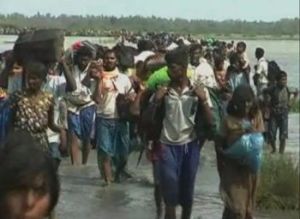 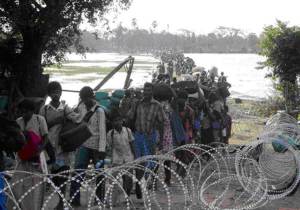 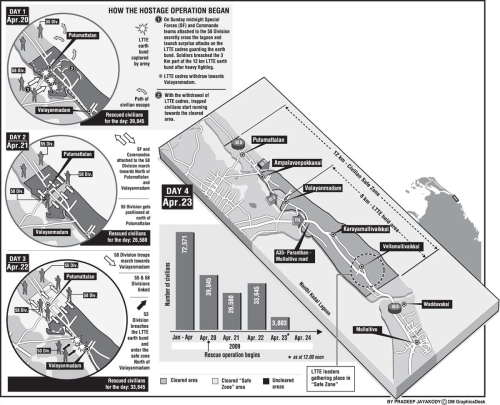 This process, including clear daytime scenes, was seen on live footage from UAVs by privileged diplomats and reporters at the operation room of the SLAF in Slave Island, Colombo on Monday the 20th April. This remarkable relief operation was not interpreted as such by the international world. Clinton’s tirade marked a different picture, supported by lamentations in other quarters such as The Economist of 23rd April 2009.

Since then Weiss has been among those peddling this reading. Like the US government his criticisms have embraced the LTTE, but then concentrated heavily on “war crimes” and other misdemeanours on the part of GSL.

One spearhead in this programme has been a battery of UN functionaries in the service of the Western cabal. The “UN Panel of Experts” appointed by Navy Pillai served as the battering ram in this campaign in a report presented in March 2011. An examination of this document by a Marga team concluded that its methodology was slipshod and that it did not proceed like a judicial board, but worked as a prosecution team seeking prima facie evidence for a trial. However, Marga is a tiny outfit in a tiny island. Its inputs are simply drowned out in the gargantuan international world of power.

Gordon Weiss has been one force in these power-games. Located in Sydney and associated with radical-liberal media and academic agencies in that metropolis, he has reached far and wide in a campaign that describes the Sri Lankan war in ways that renders GSL the prime target. His presentation at the Edinburgh Literary Festival was reworked in print form as “Sri Lanka’s Srebenica Moment.” This provided a specific slant supplementing a general survey in The Cage (2011) – a book that is widely available.

Amongst many claims, The Cage asserts: “[w]hile the Tamil Tigers preserved the Vanni Tamils as a human shield, the Sri Lankan government deliberately denied the besieged population food, medicine, shelter and medical and (sic) aid personnel” (p. 196). On the 16th October 2014 Weiss repeated this particular charge at a panel discussion organized by the University of Queensland (UQ), one which featured Emily Howie of Amnesty International and a leading SL Tamil activist, Dr. Sam Pari.

Earlier in 2014 Weiss had been part of a committee of five which compiled a large document entitled Island of Impunity? Investigation into International Crimes in the Final Stages of the Sri Lankan Civil War for the Public Advocacy Centre in Sydney. This instrument served as the foundation for an address in the Senate by Christine Milne, Leader of the Australian Greens Party, on 11th February 2014. Inter alia Milne accused the Sri Lankan government of preventing humanitarian aid from reaching the trapped populace.

This was an outrageous lie. It catered to the Western world’s ignorance about the basic political manoeuvres in the island which had led GSL from 1990 onwards to treat the de facto state of Thamilīlam as an “uncleared area” where the state officials were paid by Colombo but took orders from the LTTE, while stocks of essential supplies (barring items of military value) were despatched regularly to Tigerland. This was a massive operation financed by international goodwill as well as GSL monies and serviced by Western governments, INGOs and NGOs working in coordination with GSL functionaries.

After Eelam War IV commenced in October 2006, a Consultative Committee on Humanitarian Assistance chaired by a Minister, Mahinda Samarasinghe including leading ambassadors, the Chairman of the NGOs Committee, the Director of the World Food Programme and a government official in charge of essential services among others, was set up to coordinate these activities.

To service this activity a logistics hub was located at Vavuniya in government-controlled territory just south of the southern border of Thamilīlam (Pics 7, 8 & 9). In late 2008 the Medical Superintendent in Kilinochchi and other Tamil officials in Tiger territory showed commendable foresight in stockpiling medical supplies and refrigerators for an anticipated emergency down the track. 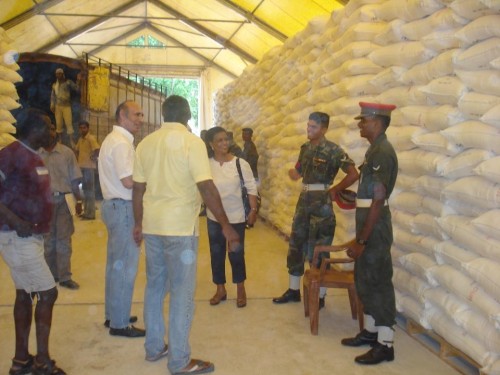 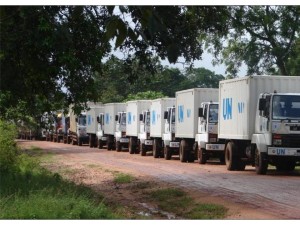 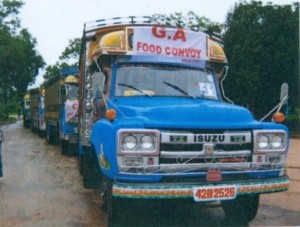 When land convoys conveying supplies (e. g. basic foods and medicines) to the war theatre were not feasible after late January 2009, the ICRC chartered commercial ships that were escorted to the coastal front by the SL Navy. At least 31 voyages occurred between early February and 9th May. From that land-and-water war front, the ICRC ships also evacuated injured and sick (selected by the LTTE): at least 13,794 men, women and children were evacuated to Pulmoddai or Trincomalee (Pics 10-13). 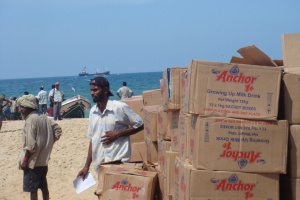 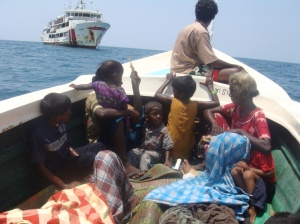 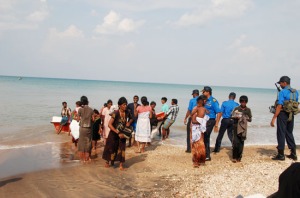 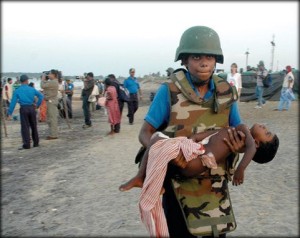 As UN Media Officer, Weiss would have been cognisant of such activities. In describing the inhumane impact of SL Army shelling in late January 2009 witnessed by UN officials in a chapter entitled “Convoy 11” in The Cage, Weiss inadvertently tells us that ten other convoys had taken supplies to Thamilīlam earlier.

So, his subsequent accounts amount to a work of duplicity. Christine Milne bought into this duplicity and even expanded on this act by coupling GSL with the LTTE in her charge of child-conscription:

“During the armed conflict between the Sri Lankan government and the Liberation Tigers of Tamil Eelam, human rights abuses and violations of international law were widespread. It is alleged that in the final years of the conflict war crimes and crimes against humanity were committed by both government forces and the LTTE …. overwhelmingly the evidence gathered suggests the vast majority of crimes were committed by the Sri Lankan security forces. This includes allegations of attacks in and around civilian areas; restriction of civilian movement; denial of humanitarian assistance; killing, conscripting and enlisting of children; rape and sexual violence; torture and cruel treatment and enforced disappearances.”

While embracing the LTTE in such accusations, the international circuit has taken advantage of the absence of any surviving Tiger leaders to focus on members of the GSL as the sole target of judicial action. The main charge here is not the alleged failure to provide aid, but gross exaggerations of the number of civilians killed. In circumstances where Tiger fighters did not wear uniforms the UNPoE’s reference to the credible possibility that there “could have been as many as 40,000 civilian deaths” became a definitive figure of 40,000 killed in media reportage throughout the world. Amnesty International adopted this figure as fact and did not alter its internet presentation when the error was pointed out. Emily Howie’s presence at the Queensland media event was in line with the slant adopted by this leading agency for ethical action.

In pinpointing such cardinal errors in the facts surrounding Eelam War IV, I am clearly participating in the propaganda war surrounding the topic. Whatever the leanings attributed to my writings, I wish readers to focus here on an issue that fascinates me: how is it that people of ethical stance such as Gordon Weiss indulge in such chicanery? Can we conclude that the target of criticism becomes more important than the facts?  and that there are none so blind than persons of fervour glued to one horizon?

Anonymous 2009a “The Sri Lankan army could turn triumph into disaster unless it shows restraint, Economist.com, April 23, http://www.economist.com/opinion/displaystory.cfm?story_id=13527659.

Marga 2011 An Analysis and Evaluation of The Report of the Advisory Panel to the UNSG in the Final Stages of the War in Sri Lanka, https://www.dropbox.com/ s/0eybj1ynej6spaa/ The%20Darusman%20Report-%20Final%20doc-2.doc

Reddy, Muralidhar 2009e “Final Assault. A first-hand account of the war and the civilians’ plight as Eelam War almost comes to a close,” Frontline, 26/11, May 23-June 5, 2009, http://www.frontline.in/navigation/?type=static&page=archive.

16 responses to “A Puzzle: When Weiss, Amnesty International and Aussie Greens LIE”