Disappearances and Torture in Lanka, 2009-16: A Bibliography 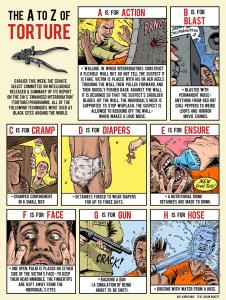 In reviewing the blog comments on my short memo on “Sinhala Mind-Set” during the years 2009-15,  I was induced to place a claim by one “Flloyd” before about eighty of friends and others in my email address list in order to evaluate his assertion in April 2013 that “the Tamils continue to be tortured, raped, and killed by the state.” Though reading this particular charge as far too sweeping, I set out to test my reading. In my thinking this claim gained weight from the fact that the rest of Flloyd’s commentary suggested that he was not an extremist.

Some 23 individuals – including 5 Tamils, 1 Irishman,1 Colombo Chetty and 2 Indians — have responded, albeit briefly in several instances (with a few endorsing  my suggestion that it is a sweeping exaggeration).. This item is now on web. One of those who commented, the Telugu Indian journalist Muralidhar Reddy has been kind enough to send me a private note from his location (now in India) that runs thus: “This turned out to be a very good exercise. Productive, useful and frankness from the heart of real people who were or are still on the ground.”

In pursuit of further value, I now present a BIBLIOGRAPHY on the topic of disappearances that amplifies previous efforts – one that has been assisted by the recent exercise. Note that I have not embraced items that focus specifically on rape in this exercise. Ii is a standard practice in agit-prop action from anti-state activists[1] as well as foreign reporters on brief excursions to the island to bracket “disappearances, torture and rape” together. Such an ‘alliance’ brings feminists on board and illuminates the halo around any writer’s head.

However, to bring instances of rape into the frame of inter-ethnic violence is fraught with problems because there is reason to surmise that a high proportion of the known instances of rape are by Sinhalese on Sinhalese and Tamils on Tamils. The recent gang-rape and murder of Sivaloganathan Vithiya at Pungudutivu on 15th May 2015 seems to have been a case of intra-familial vengeance-as Dinusha Panditharatne indicated in her comment. But it was the occasion for anti-state protests in Tamil area — a pointer to the depths of bitterness residing in Tamil hearts.

Yes, rape has certainly been an incidental tactic within wars the world over and, in my surmise, it is probable that we will never be able to extricate the figures for rape by the fighters on both sides during the Eelam Wars; nor those for rape inflicted on both male and female prisoners of war or Tamil internees in the years 2006-2016. But whatever the figures or specific incidents we recover, they must be set alongside the broader regional backdrop of comparative regional statistics on rape within Sri Lanka over time, with further contextualization provided by comparative statistics on suicide and murder within the provinces and districts of the island.

If memory serves me right,[2] Sri Lanka has had a high suicide rate for decades; and it ranked third highest in the world in 2012 with 28.8 per 100,000 thousand according to WHO figures. The comparative figures for the world in Wikipedia and other sites must be viewed with caution and deciphered by experts in such fields. For what they are worth, the figures for rape in the sensationalist “Top Ten in the World” indicated that Sri Lanka was second highest “two years ago,”[3] but had slipped [and thus improved] beyond the worst ten by 2016 (or whenever Ejaz Khan presented his summary — with no date indicated — recently.[4] According to one set of police figures the rate was 10.6 per 100,000 people in 2013. Clearly, we need those with expertise in this field to analyse the regional distribution over a period, with spot checks on similar data from the 20th century, to see if the incidence of rape in Tamil-majority districts in recent years  is greater than those in Sinhala-majority districts. Till that is done and placed in the public domain, I hold that it is best to bracket “rape” within a box entitled “yet to be studied.”

So, the focus in this list is on data and arguments relating to the incidence of “disappearances” and “torture” in the period 2009-16. Some items are more pertinent in presenting the surrounding circumstances: these are coloured PURPLE. I encourage interested parties to submit other references That I have missed – so this will hopefully be a growing reference list

[3] See Ejaz Khan at http://www.wonderslist.com/10-countries-highest-rape-crime/ hwere the country description runs thus: “Sri Lanka’s security forces are still raping and torturing suspects. There have been recent allegations that rape and torture by the Sri Lankan security forces have continued four years after the civil war ended. The UN Multi-country Study on Men and Violence found that 14.5% of the sample of Sri Lankan men had perpetrated rape at some point in their lives. 4.9% had raped in the past year. 2.7% had raped another man. 1.6% had took part in a gang rape. 96.5% of the men who had raped experienced no legal consequences. 65.8% didn’t feel worried or guilty afterwards. 64.9% of rapists had raped more than once, and 11.1% had raped four or more girls or women. That’s why the country has highest suicide rates in the world.

BCGR n. d. “Reuniting Rehabilitated ex-combatants with their families and Reintegrating them into Society,” http://www.bcgr.gov.lk/

Croos, Fr. J., Deanne Uyangoda and Ruki Fernando 2011 “Threats, Harassments and Restrictions on Former Detainees and Their Families in Vanni,” 11 May 2011, http://www.srilankaguardian.org/2011/05/threats-harassments-and-restrictions-on.html

Groundviews 2016  “Groundviews on Disappearances and the OMP,” 3 September 2016, https://thuppahi.wordpress.com/2016/09/03/groundviews-on-disappearances-and-the-omp/

Jeyaraj, DBS 2007 “An Overview of the “Enforced Disappearances” Phenomenon,” http://dbsjeyaraj.com/dbsj/archives/5508  and  http://www.thesundayleader.lk/2012/04/15/an-overview-of-the-enforced-disappearances-phenomenon/

ICRC 2009a “ICRC Information [on Evacuees from Conflict Zone, 2009,” http://www.icrc.org/eng/resources/documents/interview/sri-lanka-interview-200509.htm

ICRC 2009b “Sri Lanka: ICRC assists thousands of persons in government-run sites for the displaced,” http://www.icrc.org/eng/resources/documents/update/sri-lanka-update-090609.htm

ICRC 2016 Living with Uncertainty: Needs of the Families of Missing Persons in Sri Lanka, July 2016,  https://www.icrc.org/en/document/sri-lanka-families-missing-persons

Ministry of Defence 2012a “A Factual Analysis of Disappearances and Abductions,” http://www.defence.lk/new.asp?fname=factual_analysis_of_disappearances_and_abductions_20120720_05, last modified 26/7/2012

OHCHR 2015 “Preliminary observations of the Working Group on Enforced or Involuntary Disappearances at the conclusion of its visit to Sri Lanka,” 18 Nov. 2015, http://www.ohchr.org/EN/NewsEvents/Pages/DisplayNews.aspx?NewsID=16771&LangID=E

Padraig Colman 2013 “Revisiting Gordon Weiss’s accountability in his The Cage,” 12 May 2013, https://thuppahi.wordpress.com/2013/05/12/revisiting-gordon-weisss-accountability-in-his-the-cage/

Reddy, Muralidhar 2009e “Final Assault. A first-hand account of the war and the civilians’ plight as Eelam War almost comes to a close,” Frontline, 26/11, May 23-June 5, 2009, http://www.frontline.in/navigation/?type=static&page=archive.

Roberts, Michael 2011 “Mental Health Facilities for the Tamils at the IDP Camps and Now for Those Being Resettled. Reports from Manori Unambuwe,” 9 September 2011, https://thuppahi.wordpress.com/2011/09/09/mental-health-facilities-for-the-tamils-at-the-idp-camps-and-now-for-those-being-resettled-%e2%80%a6-reports-from-manori-unambuwe/

Roberts, Michael 2012 “What is missing in those “Missing”? Issues relating to the statistics on enforced disappearances in Lanka,” 30 May 2012, https://thuppahi.wordpress.com/2012/05/30/what-is-missing-in-those-missing-issues-realting-to-the-statistics-on-enforced-disappearances-in-lanka/ …. Also in GV at http://groundviews.org/2012/05/27/the-disappeared-in-sri-lankas-war-in-the-recent-past-what-is-missing-in-those-missing/

Roberts, Michael 2013 “Pictorial Illustrations of the Mass Exodus from the Last Redoubt, 20-22 April and mid-May 2009: Appendix V for “BBC Blind”,https://thuppahi.wordpress.com/2013/12/11/exodus-from-the-last-redoubt-late-april-mid-may-2009-appendix-v-for-bbc-blind

Roberts, Michael 2014 “The War in Sri Lanka and Post-War Propaganda,” [being the Memorandum to Sandra Beidas and OISL Team in Geneva]  18 November 2014, reproduced in https://groundviews.org/2014/11/07/the-war-in-sri-lanka-and-propaganda-debates-an-analysis-for-the-ohchr-in-geneva/AND https://thuppahi.wordpress.com/2014/11/18/the-war-in-sri-lanka-and-propaganda-debates/

Roberts, Michael 2014 “Cartographic & Photographic Illustrations in support of the Memorandum Analysing the War in Sri Lanka and Its Propaganda Debates,” 18 November 2014, https://thuppahi.wordpress.com/2014/11/18/cartographic-photographic-illustrations-in-support-of-the-memorandum-analysing-the-war-in-sri-lanka-and-propaganda-debates/

Thangavelu, Velupillai 2013 “LTTE Cadres Who Surrendered to The Army: Where Are They?” Colombo Telegraph, 18 August 2013, http://www.colombotelegraph.com/index.php/ltte-cadres-who-surrendered-to-the-army-where-are-they/.

US Department of State 2009 Report to Congress on Incidents During the Recent Conflict in Sri Lanka.

UTHR 2009 A Marred Victory and a Defeat pregnant with Meaning,Special Report No. 32.

BHAVANI FONSEKA: “THE OFFICE ON MISSING PERSONS: A NEW CHAPTER OR ANOTHER EMPTY PROMISE?” 18 AUGUST 2016,HTTPS://GROUNDVIEWS.ORG/2016/08/18/THE-OFFICE-ON-MISSING-PERSONS-A-NEW-CHAPTER-OR-ANOTHER-EMPTY-PROMISE/

6 responses to “Disappearances and Torture in Lanka, 2009-16: A Bibliography”