Kill Any Sikh: The Anti-Sikh Pogrom of 1984 in Delhi in Bhawan Singh’s IMAGES

@= Deep Anguish etched in every face

The first two images reveal the agitation and anguish of Indian citizens in Delhi who had rushed to the entrance of the All India Institute of Medical Sciences on the 31st October where Indira Gandhi had been rushed to in hopes of her resuscitation after she was shot by her own Sikh bodyguards. Two more pictures below underline the emotions coursing through the minds and bodies of these patriot citizens of India who were so moved by the prospect of her death that they rushed to her side so to speak.

The pictures are also an epitaph to one “Bhawan Singh,” an Indian photo-journalist whom I never ever met.  All I have is a set of 11 celluloid slides marked “Bhawan Singh.” These were collected by me from the headquarters of the magazine India Today in the year 1995 when I spent four months in Delhi researching the topic of “riots in India.” The goal was to deepen my reading of “riots in Sri Lanka” through exposure to comparative material in India. Research leave and grants from the University of Adelaide and a Fellowship at Teen Murti via the cooperation of Ravinder Kumar facilitated this enterprise. There in Delhi I was able to rekindle my academic contact with Veena Das[1] and to develop fruitful interaction with such academics as Deepak Mehta, Ashis Nandy and Neeladri Bhattacharya.

In this enterprise, I poured through the newspaper archives at Teen Murti. I also visited the offices of the Indian Express, Times of India and India Today. I cannot recall who I met at India Today or whether any stipulations were attached to the pictures I selected from their archives. I cannot recall meeting Bhawan Singh, though in the course of my stay I certainly met some cameramen personally and tapped their recollections. I am afraid that my notes on this work seem to be lost, though I have photocopies of news clippings.

What I was groping towards in this venture, albeit inchoately, was (A) a sensitivity towards the ethnographic records on religious and ethnic violence in South Asia through comparative data; and (B) the sharpening of understanding and raising of consciousness by the deployment of graphic images. When I moved to Sri Lanka in mid-1995 in continuation of my research, in fact I approached one of the German foundations located there to see if they would fund such work[2] – without luck.  Looking back now I would claim that in my inchoate manner I was in pursuit of a potential goldmine – one which has yet to be embraced in full by the historians and ethnographers in the universe. The camera has much to offer us …… as long as the lens is supported by precise ethnographic recounting and contextual elaboration.[3] As proviso, I stress that the camera can also mislead where it is deployed by powerful governments and/or media chains engaging in power politics.[4]

With this proviso, the images in this collection must surely serve aa an “Ode to Bhawan Singh.”….. yes, even though we have never met. Alas, I cannot provide significant details about any of his photographs. All I have on each slide is this: “Bhawan Singh INDIA TODAY.”

It is now the task of Indian reporters and scholars to amplify the context of each image. Better still it is up to the Indian academic institutes to augment and systematize the pictorial record of India’s past in a wide variety of topics, inclusive of religio-ethnic violence. 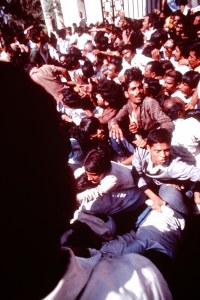 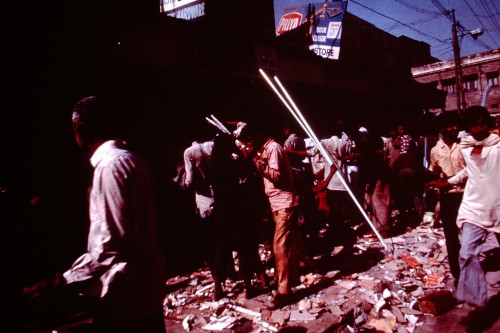 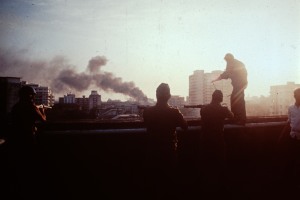 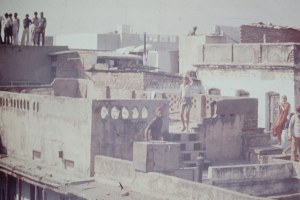 [1] I met Veena Das for the first time at conference in Kathmandu in Nepal in February 1987 devoted to the topic of ethnic violence in South Asia that was organised by Neelan Tiruchelvam and others. One outcome of this gathering is the Book edited by Das, viz., Mirrors of Violence. Communities, Riots and Survivors in South Asia, Delhi, OUP, 1990 where I have an article entitled “Noise as Cultural Struggle: Tom-Tom Beating, the British and Communal Disturbances in Sri Lanka, 1880s-1930s.”

[2] My memory is so dulled that I cannot recall its name.

[3] In illustrative support, I point to my own work – in particular the following;

[4] As illustration, one should study the Channel Four You Tube Video presentation on Sri Lanka after reading (a) AA Gill, “Channel Four’s Shoddy Sensationalism exposed,” 22 June 2011,  https://thuppahi.wordpress.com/2011/06/22/channel-fours-shoddy-sensationalism-exposed/ AND  (b) Siri Hewavitharana’s assessment, 10 June 2011 at http://www.lankaweb.com/…/channel-4-video-is-fake-edited-and-video-tak&#8230;

10 responses to “Kill Any Sikh: The Anti-Sikh Pogrom of 1984 in Delhi in Bhawan Singh’s IMAGES”