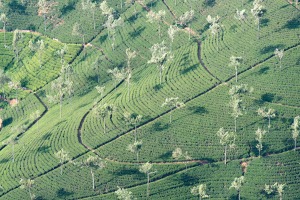 Ceylon Tea is a must-read, must-absorb work of art. Its review of the history of tea in Sri Lanka is set in deep context – context historical, context political and context social. As such, it is a tour de force.

Presented in simple yet arresting prose with a commendable economy of words, Ceylon Tea illuminates many aspects of life in British Ceylon as well as Sīhalē and Sri Lanka past and present. In a surprising move its contextualization extends to the beginning of civilizational time and involves a distilled history based on KM de Silva’s A History of Sri Lanka (1981). As that year of production suggests, the survey does not absorb subsequent studies so that it adheres to the standard view of pre-British political form that reads states in modern bureaucratic terms. It therefore does not attend to the concept of centre-oriented galactic states in the manner of S. J. Tambiah, Paul Wheatley and Burton Stein. It also misses the implication of regular Dutch embassies to Mahānuvara (Kandy) involving rites of däkum that recognized the king’s writ over the whole island in the fashion prevailing for centuries.

This is to quibble over the design of the gatepost at the entrance to a substantial mansion. The heart of the book is the set of contexts preceding and surrounding the business of growing tea and selling it. This focus leads Richard Simon to delineate the British conquest of the island in its three steps (1795/96, 1815 and 1817/18); the strength of the British demand for Chinese tea from the 18th century; the administrative and communication revolution undertaken by the British in the island during their rule; the growth of the coffee industry in the mid-nineteenth century; its collapse in the 1880s and the resurgence of the plantation industry from the 1890s with tea production as its principal engine. 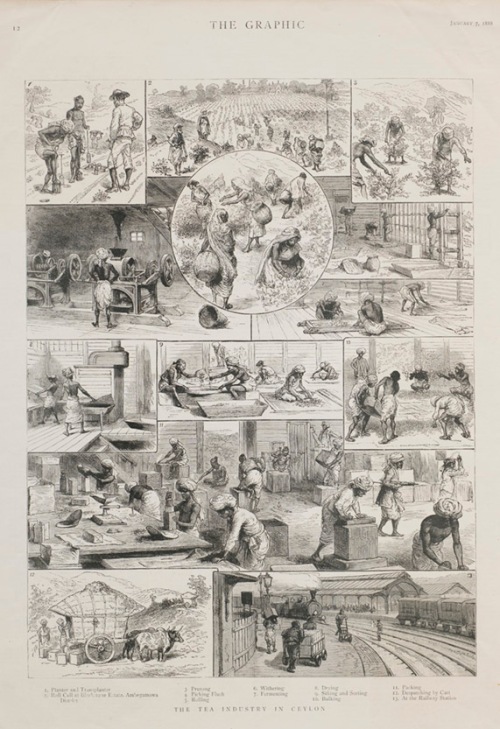 ‘The tea industry in Ceylon.’ Illustration from the Graphic magazine, 1888, showing the stages of cultivation, plucking, manufacture, ‘bulking’ and despatch.

The latter theme, enfolding numerous strands of significance within it, is the heart of the book. An intelligent partitioning of chapters, innovative chapter titles and a felicitous writing style enhances the value of its investigations. Moreover, the pictorial images hit one in the eye. They are not mere adornments. They clarify.

They also heighten the interest of contemporary readers. Thus, the images of D. S. Senanāyake, O. E. Goonetilleka, S. W. R. D. Bandāranaike, Sirimāvo Bandāranaike, Rohana Wijeweera, Hector Kobbekaduwa and Prabhākaran must surely evoke interest – the more so when Wijeweera is displayed without a beard and when N. M’ Perera and Colvin R. de Silva are shown bearing a tray of offerings at the Daladā Maligāwa. These inserts are not mere widow-dressing. The political interventions that such personnel are associated with are important facets of the contextual elaboration through deft analysis.

Take one illustration: in an apt summary, readers are told that “the [JVP] insurrection of April 1971 was a hapless, amateur effort, prematurely launched and irremediably botched. It did, however, surprise and frighten the government by its sheer size – the JVP had tens of thousands of cadres to throw into action – and suddenness” (Ceylon Tea, p. 192). Later the author tells us that the JVP insurgency of the late 198-0s was far more lethal: from a stance “less Marxist and far more Sinhalese-nationalist,” its activists “began burning down tea factories and killing estate superintendents. In all, a total of 21 factories were destroyed and another six seriously damaged” (p. 229).

Coffee-table enthusiasts are fully alive to the virtues of captivating artwork or images as presentational form. Simon’s Ceylon Tea is exploiting the genealogy of the coffee-table form. But it is far more. Its aesthetics are rounded off by solid historical contextualization – not just sketches illuminating pictorial items, but grounded and sustained historical analyses on a number or pertinent and inter-related motifs. The images may be many, they may attract. They are nevertheless an adjunct to good historical telling. This is a solid historical investigation not just a thing to be dipped into, “sipped” shall I say, occasionally. 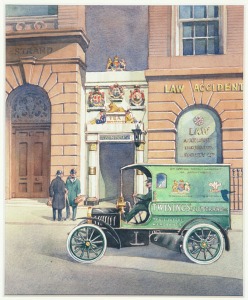 Diminutive but scarcely unpretentious: the entrance to Twinings’ offices in the Strand, London, during the late 1800s.

Ceylon Tea’s historical investigation is based on wide reading that incorporates the insights from 19th century works such as those by John Capper and H. W. Cave as well as recent studies by D. M. Forrest and Donald Snodgrass. It also deploys quotations from the captivating prose of a knowledgeable observer, E. F. C. Ludowyk in his The Story of Ceylon (1962). It would have been intriguing to see how Richard Simon would have incorporated the findings of SBD de Silva (1982), Newton Gunasinghe (1990), Kumari Jayawardena (1972) and DM Wesumperuma (1986) into his synthesis — so there are missing possibilities.

S. B. D. de Silva’s line of Marxist thinking would, however, have entered the work of the “State Commission” (comprising Bernard Soysa, Buddhadasa Hewavitarana and Kumari Jayawardena) set up in June 1971 to investigate the plantation industry and propose reforms for the United Front government to pursue. Simon’s commentaries on that report and its impact on the plantation industry, and thus on Sri Lanka’s economic circumstances in general, are truly eye-openers.

As one reads this work one will chance upon nuggets of information pertaining to the economic history of the island. Take these samples:

Ceylon Tea is not a fawning celebration of the mercantile sector and the tea industry. It is a solid analysis that reveals the warts and failures as well as the benefits associated with the enterprise. A laconic prose incorporates a critical note: thus, as illustration, the concept “plantocracy” cannot but raise consciousness in the readers. The critical eye is underlined by repeated criticism of the circumstances of the plantation labour force and its broader ‘umbrella,’ viz. the census category “Indian Tamils,” from the 19th century to the present.

Take note of one set of summarizing comments that refers to the hill-country Tamils in the era of LTTE insurgency: “There was, of course, some sympathy towards the LTTE and the Tamil separatist cause among the plantation community, which had suffered at the hands of nationalist thugs since the 1970s. It was particularly strong among those who had found refuge in the north and east during that period, only to find themselves forcibly returned to their places of origin in the hill country after 1983. But the majority of up-country Tamils now enjoyed Sri Lankan citizenship (migration to India and citizenship registration in Sri Lanka had both accelerated after the change of government) and were loth to risk their newfound rights by further agitation. Besides, most up-country Tamils had not forgotten how shabbily their people had been treated in the past by ‘Ceylon Tamil’ community leaders, and how the TULF had excluded them from the proposed Tamil Eelam. The two Tamil communities of Sri Lanka were far from united in their outlooks, aspirations or goals. The few up-country Tamils who did choose to take up arms preferred to slip away and join the Tigers rather than make trouble in the plantation districts themselves. Any such attempt, they knew, would only bring ruin, and quite possibly death, upon their families and neighbours” (p. 228).

This is a revealing summary and should serve as an eye-opener to both sides of the island’s main political divide. It is just one sample of an exhaustive yet readable exposition of the internal ordering of the tea business as it developed over time, with the central changes clearly delineated and dated; while every shift is carefully located in the changing political dispensations.

As an inveterate drinker of tea – Ceylon tea preferably – as well as a historian, I can tell you that reading Ceylon Tea. The Trade that made a Nation is invigorating.