This photo is from TamilNet (Tiger site) and taken on 1 May 2009 –while displaying the congestion alongside the main road straddling the Last Redoubt, it suggests little damage from artillery/mortar fire. 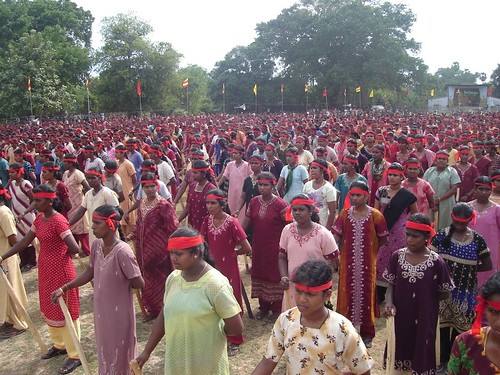 The “Times” images were taken by a cameraman stringer aboard Ban-Ki Moon’s SLAF heli-flight over the war zone after the the LTTE had been defeated. These images must be read carefully and balanced by attention to the crowded conditions in the Last Redoubt [so called “No Fire Zone II”].

The danger of an amateur reading was exemplified in the comments of Ban Ki-Moon himself  — see my comments in “The Landscape of the LTTE’s Last Redoubt” in Roberts, Tamil Person and State. Essays, Colombo, Vijitha Yapa, 2014, pp. 204-17. My slashing critique of some Western reportage can be seen in a sub-section entitled  “Inept and Jaundiced Reporters groping in the Dark” which introduces Tamil Person and State. Pictorial (2014) pp. 11-19. One Western reporter whom I target is the Canadian Rosie DiManno who focused on one image from the stringer accompanying Ban Ki-Moon after a flying visit to Lanka and mis-read it comprehensively.

The errors are in the detail and can only be discussed with the image and Di Manno’s slipshod reading in front of one’s eyes. There are no heavy artillery craters in the image DiManno deployed. The three red-tiled houses in the photo are not damaged and the foreground area was probably occupied by tents — now flattened; while the abandoned buses and vehicles do not seem to have severe damage,

This stressed, I add that the casual and prejudiced readings of the aerial evidence did not extend to some reporters including the Indians Balachandran and Reddy…. Nor can this criticism be extended to the Reuters collective under Bryson Hull in Colombo. The pictorial imagery conveyed by Reuters during the crucial days 19-23rd April 2009 are drawn from a wide variety of sources and serve as essential ‘reading’ for those studying the war.

One image t aken by a Reuters stringer .…… BUT go through the lot