It is 3 years since I gave the keynote address at the International Centre for Ethnic Studies (Kandy) conference on Buddhism in relation to other religions.  My presentation was revised an subsequently published as the lead article in the book that was a by-product of the conference.  My thesis was simple:  to illustrate how recent social, economic and political changes in Theravada-dominated countries have had an effect on their respective religious cultures.  My argument about Sri Lanka was also quite simple:  that 26 years of civil war had contributed to the emergence of Buddhist militancy–the BBS being the classic example.  Immediately following that conference, Gerry Peiris sent out sharply critical e-mails about my presentation to an extended group of his like-minded friends.  When I came to know about his rather personal attacks through some of my own Sri Lankan friends, I quietly exchanged several detailed e-mails with Peiris engaging him quite thoroughly and, as I thought at the time, putting the matters to rest in a civil manner.

Muslims stand next to a burnt shop after a clash between Buddhists and Muslims in Aluthgama June 16, 2014. At least three Muslims were killed and 75 people seriously injured in violence between Buddhists and Muslims in southern Sri Lankan coastal towns best known as tourist draws, with Muslim homes set ablaze, officials and residents said on Monday. REUTERS/Dinuka Liyanawatte

From what he has written now some three years later, I can see that I essentially wasted my time back then.  And therefore, I do not want to waste any more now responding yet again.  For readers genuinely interested in more carefully considered issues regarding how belligerent Buddhists have assailed Muslims in their midst from 2012-2015, I can refer them to a collection of essays I have recently published entitled Buddhist Extremists and Muslim Minorities (New York:  Oxford University Press, 2016).  Given yesterday’s news that militant monks had attacked 31 Rohingya refugees (16 children, 7 women and 8 men) in a UN sponsored Mt. Lavinia safe house, it seems that the efforts of Buddhist militancy continue to sully the good name of the Buddhist religion in Sri Lanka. 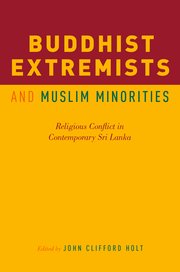 2009 brought the end of the protracted civil war in Sri Lanka, and observers hoped to see the re-establishment of harmonious religious and ethnic relations among the various communities in the country. Immediately following the war’s end, however, almost 300,000 Tamil people in the Northern Province were detained for up to a year’s time in hurriedly constructed camps where they were closely scrutinized by military investigators to determine whether they might pose a threat to the country. While almost all had been released and resettled by 2011, the current government has not introduced, nor even seriously entertained, any significant measures of power devolution that might create meaningful degrees of autonomy in the regions that remain dominated by Tamil peoples. The Sri Lankan government has grown increasingly autocratic, attempting to assert its control over the local media and non-governmental organizations while at the same time reorienting its foreign policy away from the US, UK, EU, and Japan, to an orbit that now includes China, Burma, Russia and Iran. At the same time, hardline right-wing groups of Sinhala Buddhists have propagated-arguably with the government’s tacit approval-the idea of an international conspiracy designed to destabilize Sri Lanka. The local targets of these extremist groups, the so-called fronts of this alleged conspiracy, have been identified as Christians and Muslims. Many Christian churches have suffered numerous attacks at the hands of Buddhist extremists, but the Muslim community has borne the brunt of the suffering.

Buddhist Extremists and Muslim Minorities presents a collection of essays that investigate the history and current conditions of Buddhist-Muslim relations in Sri Lanka in an attempt to ascertain the causes of the present conflict. Readers unfamiliar with this story will be surprised to learn that it inverts common stereotypes of the two religious groups. In this context, certain groups of Buddhists, generally regarded as peace-oriented, are engaged in victimizing Muslims, who are increasingly regarded as militant, in unwarranted and irreligious ways. The essays reveal that the motivations for these attacks often stem from deep-seated economic disparity, but the contributors also argue that elements of religious culture have served as catalysts for the explosive violence. This is a much-needed, timely commentary that can potentially shift the standard narrative on Muslims and religious violence.

From Back Cover: “Islamophobia has triggered communal violence and poisoned social relations in several Theravada Buddhist countries in recently years.  Exploring the case of Sri Lanka, the present collection offers scholarship at its best:  informative and stimulating, engaging and sophisticated.  It presents original field observations, hard-hitting facts on Buddhist extremist derivations and comprehensive analysis, as it introduces the reader to the stunning complexity of the lives of Sri Lanka’s Muslim minorities.  Yet this is not just an insightful and timely collection of fine essays.  It promises to be immensely helpful as a resource for studying ethno-religious instability and will be required reading for anyone who takes an interest in contemporary Buddhist-Muslim relations.”  Jacques P. Leider, ECOLE FRANCAISE D’EXTREME-ORIENT

[Riaz Hamidulla]:  The Rohingya Issue: Bangladeshi Diplomat in Q and A with Ratnawalli,” 25 September 2017, https://thuppahi.wordpress.com/2017/09/25/the-rohingya-issue-bangaldeshi-diplomat-in-q-and-a-with-ratnawalli/

Colombo Telegraph: “With A Little Political Backing We Can End The Rise Of Muslims,’ Gnanasara Who Wishes To Emulate Prabhakaran Declares,” 21 September 2016, https//www.colombotelegraph.comindex.php//with-a-Little-political-backing-ww-can-end-the-rise-of-muslims,-gnanasara-who-wishes-to-emulate-prabhakaran-declares/

IMAGES — A Note of Caution: the photographs from the Scene of the Aluthgama clashes at the outset are arbitrary selections directed by marketing reasons — to draw readers.  Many of the selections in google are from powerful Western media outlets guided by sensationalist criteria (and sometimes the web reference cannot be located). One needs to study a collection of images from diverse sources and to resort to the detailed studies provided by Gerald Peiris and others to work out the sequence and intensity of the clashes and attacks in an area where the Muslims had muscle and dominance in specific localities.

The scenes below from the destruction at Aluthgama in June 2014 are all from CNN or BBC and other Western outlets.  My experience of the one-sided pictorial and verbal representations of the last stages of the Eelam War IV induces a certain degree of caution in readings of this pictorial imagery and its context. 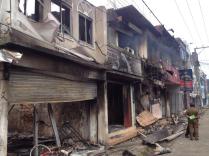 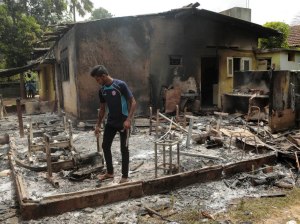