Douma: Terror from Many Sides and Confusing Tales. Hypoxia not Gas?

Robert Fisk, in The Independent, 15 April 2018,  with this title “The search for truth in the rubble of Douma – and one doctor’s doubts over the chemical attack”

This is the story of a town called Douma, a ravaged, stinking place of smashed apartment blocks – and of an underground clinic whose images of suffering allowed three of the Western world’s most powerful nations to bomb Syria last week. There’s even a friendly doctor in a green coat who, when I track him down in the very same clinic, cheerfully tells me that the “gas” videotape which horrified the world – despite all the doubters – is perfectly genuine. 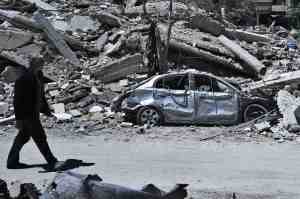 an image from another source -viz. The Guardian …

War stories, however, have a habit of growing darker. For the same 58-year old senior Syrian doctor then adds something profoundly uncomfortable: the patients, he says, were overcome not by gas but by oxygen starvation in the rubbish-filled tunnels and basements in which they lived, on a night of wind and heavy shelling that stirred up a dust storm.

As Dr Assim Rahaibani announces this extraordinary conclusion, it is worth observing that he is by his own admission not an eyewitness himself and, as he speaks good English, he refers twice to the jihadi gunmen of Jaish el-Islam [the Army of Islam] in Douma as “terrorists” – the regime’s word for their enemies, and a term used by many people across Syria. Am I hearing this right? Which version of events are we to believe?

By bad luck, too, the doctors who were on duty that night on 7 April were all in Damascus giving evidence to a chemical weapons enquiry, which will be attempting to provide a definitive answer to that question in the coming weeks.

France, meanwhile, has said it has “proof” chemical weapons were used, and US media have quoted sources saying urine and blood tests showed this too. The WHO has said its partners on the ground treated 500 patients “exhibiting signs and symptoms consistent with exposure to toxic chemicals”.

At the same time, inspectors from the Organisation for the Prohibition of Chemical Weapons (OPCW) are currently blocked from coming here to the site of the alleged gas attack themselves, ostensibly because they lacked the correct UN permits.

Before we go any further, readers should be aware that this is not the only story in Douma. There are the many people I talked to amid the ruins of the town who said they had “never believed in” gas stories – which were usually put about, they claimed, by the armed Islamist groups. These particular jihadis survived under a blizzard of shellfire by living in other’s people’s homes and in vast, wide tunnels with underground roads carved through the living rock by prisoners with pick-axes on three levels beneath the town. I walked through three of them yesterday, vast corridors of living rock which still contained Russian – yes, Russian – rockets and burned-out cars.

So the story of Douma is thus not just a story of gas – or no gas, as the case may be. It’s about thousands of people who did not opt for evacuation from Douma on buses that left last week, alongside the gunmen with whom they had to live like troglodytes for months in order to survive. I walked across this town quite freely yesterday without soldier, policeman or minder to haunt my footsteps, just two Syrian friends, a camera and a notebook. I sometimes had to clamber across 20-foot-high ramparts, up and down almost sheer walls of earth. Happy to see foreigners among them, happier still that the siege is finally over, they are mostly smiling; those whose faces you can see, of course, because a surprising number of Douma’s women wear full-length black hijab. 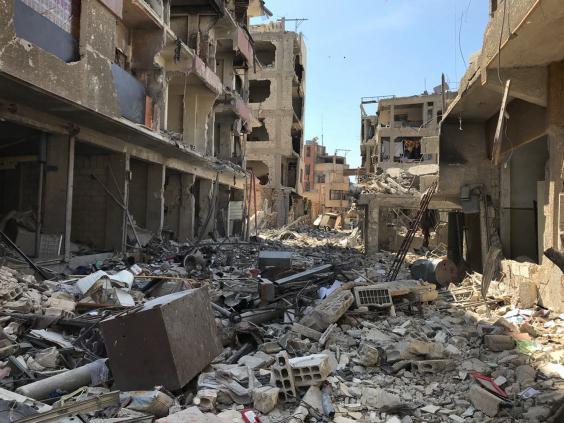 Rubble fills a street in Douma, the site of a suspected chemical weapons attack, near Damascus (AP)

I first drove into Douma as part of an escorted convoy of journalists. But once a boring general had announced outside a wrecked council house “I have no information” – that most helpful rubbish-dump of Arab officialdom – I just walked away. Several other reporters, mostly Syrian, did the same. Even a group of Russian journalists – all in military attire – drifted off.

It was a short walk to Dr Rahaibani. From the door of his subterranean clinic – “Point 200”, it is called, in the weird geology of this partly-underground city – is a corridor leading downhill where he showed me his lowly hospital and the few beds where a small girl was crying as nurses treated a cut above her eye.

“I was with my family in the basement of my home three hundred metres from here on the night but all the doctors know what happened. There was a lot of shelling [by government forces] and aircraft were always over Douma at night – but on this night, there was wind and huge dust clouds began to come into the basements and cellars where people lived. People began to arrive here suffering from hypoxia, oxygen loss. Then someone at the door, a “White Helmet”, shouted “Gas!”, and a panic began. People started throwing water over each other. Yes, the video was filmed here, it is genuine, but what you see are people suffering from hypoxia – not gas poisoning.” 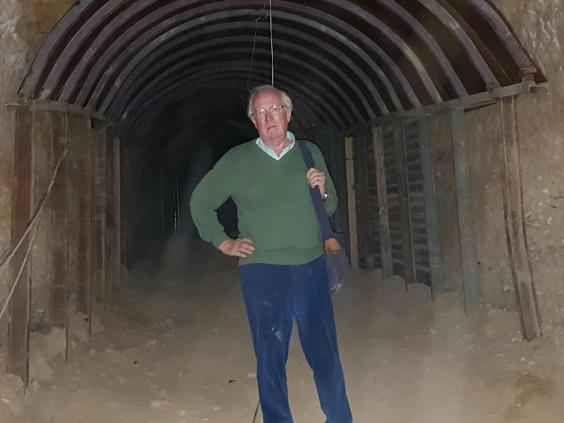 Oddly, after chatting to more than 20 people, I couldn’t find one who showed the slightest interest in Douma’s role in bringing about the Western air attacks. Two actually told me they didn’t know about the connection.

But it was a strange world I walked into. Two men, Hussam and Nazir Abu Aishe, said they were unaware how many people had been killed in Douma, although the latter admitted he had a cousin “executed by Jaish el-Islam [the Army of Islam] for allegedly being “close to the regime”. They shrugged when I asked about the 43 people said to have died in the infamous Douma attack.

The White Helmets – the medical first responders already legendary in the West but with some interesting corners to their own story – played a familiar role during the battles. They are partly funded by the Foreign Office and most of the local offices were staffed by Douma men. I found their wrecked offices not far from Dr Rahaibani’s clinic. A gas mask had been left outside a food container with one eye-piece pierced and a pile of dirty military camouflage uniforms lay inside one room. Planted, I asked myself? I doubt it. The place was heaped with capsules, broken medical equipment and files, bedding and mattresses.

Of course we must hear their side of the story, but it will not happen here: a woman told us that every member of the White Helmets in Douma abandoned their main headquarters and chose to take the government-organised and Russian-protected buses to the rebel province of Idlib with the armed groups when the final truce was agreed.

There were food stalls open and a patrol of Russian military policemen – a now optional extra for every Syrian ceasefire – and no-one had even bothered to storm into the forbidding Islamist prison near Martyr’s Square where victims were supposedly beheaded in the basements. The town’s complement of Syrian interior ministry civilian police – who eerily wear military clothes – are watched over by the Russians who may or may not be watched by the civilians. Again, my earnest questions about gas were met with what seemed genuine perplexity.

How could it be that Douma refugees who had reached camps in Turkey were already describing a gas attack which no-one in Douma today seemed to recall? It did occur to me, once I was walking for more than a mile through these wretched prisoner-groined tunnels, that the citizens of Douma lived so isolated from each other for so long that “news” in our sense of the word simply had no meaning to them. Syria doesn’t cut it as Jeffersonian democracy – as I cynically like to tell my Arab colleagues – and it is indeed a ruthless dictatorship, but that couldn’t cow these people, happy to see foreigners among them, from reacting with a few words of truth. So what were they telling me?

They talked about the Islamists under whom they had lived. They talked about how the armed groups had stolen civilian homes to avoid the Syrian government and Russian bombing. The Jaish el-Islam had burned their offices before they left, but the massive buildings inside the security zones they created had almost all been sandwiched to the ground by air strikes. A Syrian colonel I came across behind one of these buildings asked if I wanted to see how deep the tunnels were. I stopped after well over a mile when he cryptically observed that “this tunnel might reach as far as Britain”. Ah yes, Ms May, I remembered, whose air strikes had been so intimately connected to this place of tunnels and dust. And gas?

** ** ****
A NOTE: pay heed to the immediate assassination’of Robert Fisk by Terry Glavin in the National Post in Canada’= http://nationalpost.com/opinion/terry-glavin-heres-why-some-people-choose-not-to-believe-in-assads-atrocities

2 responses to “Douma: Terror from Many Sides and Confusing Tales. Hypoxia not Gas?”