Malcolm Turnbull and the Department of Defence have condemned Australian soldiers who flew a Nazi flag above an Australian army vehicle in Afghanistan. Leaked photos taken in August 2007, obtained by the ABC, show the vehicle flying a flag emblazoned with a swastika during operations. Defence confirmed that the photos were genuine, and said they “rejected everything the flag represents”.

“Defence and the Australian defence force reject as abhorrent everything this flag represents,” a spokesperson said.“Neither the flag nor its use are in line with Defence values. It is totally inappropriate for any ADF vehicle or company to have a flag of this nature.”

According to Defence, the commanding officer “took immediate action” to remove the flag, and the soldiers responsible were “immediately cautioned at the time”.

However, a Defence source told the ABC the flag was flown “for a prolonged period”, and that images of the flag were circulated among Australian soldiers. The source added that it was a “twisted joke”, and was not a genuine endorsement of Nazism or white supremacy.

Turnbull said the flag was “completely and utterly unacceptable”. “It was absolutely wrong and their commanders took action at the time,” the prime minister said on Thursday.

The leaked photos come after an internal Defence inquiry was launched into the culture of the defence force’s elite special forces, and potential war crimes committed by Australian troops in Afghanistan. 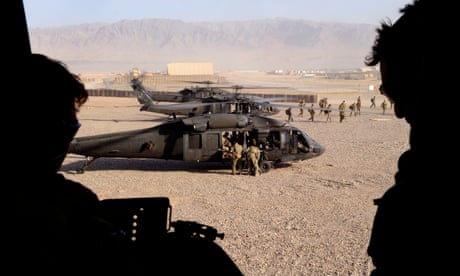 On Saturday, Fairfax Media reported that a rookie SAS officer had been pressured by superiors to kill an elderly, unarmed detainee in Afghanistan in 2009 as part of a “blooding” ritual. Defence personnel who were witnesses to the execution labelled it abhorrent.

In another incident, an Afghan man who was killed by Australian troops had his prosthetic leg taken from his body and used as a novelty drinking vessel in Perth. According to soldiers present, the man was bound as a prisoner and then pushed off a cliff. Soldiers then decided to machine gun him to “get him out of his misery”.

In a statement to Fairfax, the defence force said the allegations of war crimes would be investigated by an inquiry conducted by the inspector general of the ADF “The IGADF Afghanistan Inquiry has, for some time, been aware of allegations of significant issues involving the Special Operations Task Group in Afghanistan, which are within the scope of the Inquiry,” the statement said.