The Thinking and Operational Capacity of the 21/4 Jihadists

“Sri Lanka needs to return to normalcy as soon as possible,” said Lt.Gen. Senanayake. “We are confident we can tackle any such terrorist or extremist group, but we need the assistance of the public to perform our responsibility, and simply put, let us do our work” he said. “We won’t let any influence from anyone get in the way of us carrying out security operations” he added. In the current security climate the Sri Lanka Army (SLA) is paying close attention to the Western and Eastern Provinces, with structural changes made to better manage and coordinate overall security operations. He was confident that the possibility of another major organised attack was very weak. However, he pointed out that the possibility of a ‘lone wolf’ attack cannot be ruled out.

According to Lt.Gen. Senanayake, around 85% of the ISIS inspired terrorist group have been rounded up, including a number of hardcore members, some of whom are believed to be suicide-bomber candidates. Many who were arrested were known as persons of interest to Military Intelligence. The group was mostly made up of extremists who had splintered from NJT and JMI, but shared the same desire for violent extremism. It is also believed that Zaharan’s brother had close links with a Sri Lankan ISIS fighter in Syria, and many developed links to the terror network through him. The said fighter in Syria had been killed in battle, before the group began operational preparations.

Meanwhile, a source close to the investigation claimed that, from information available at present, it is suspected that the group had discussed a range of possible targets and agreed to attack the tourist hotels and churches on Easter Sunday, in order to kill many foreigners and Catholics, to gain international attention. “There had been many discussions and target analyses done, prior to the target selection. They had surmised that attacking a Christian target will bring in better international attention,” said the source who didn’t want to be named. The fact that ISIS had lost significant territory and the ‘Caliphate’ seems to be on the verge of collapse, may have played a factor in changing timelines for the bombers.

The failure to share intelligence and act on was highlighted in the aftermath of the bombings, with much international and local criticism directed at the government, for the blunder. “However, the synergy between intelligence agencies have now been improved,” claimed Lt.Gen. Senanayake. “After changes were made at the Ministry of Defence, we now have a better integrated Intelligence apparatus, further improvements will happen in the near future” he said. The armed forces have now re-established linkages with the Terrorism Investigation Division (TID) and work closely with Criminal Investigation Division (CID) detectives, who are investigating the bombings. The Army has requested to observe some of the high risk suspects being questioned.

Commenting on the Legal tools available to the SLA, under emergency regulations, Lt.Gen Senanayake said the Legal powers given was adequate for the task at hand. “We have sufficient Legal powers, we can search and detain any suspects, and hand them over to the Police within 24 hrs.” Lt.Gen.Senanayake said the Army was seeking advice from the Attorney General to extend the 24-hrs. detention time period to 72 hrs., in order to facilitate operational momentum. He claimed that all detainees were treated well and in accordance with human rights obligations.

The modus operandi of the Easter Sunday Bombers and the LTTE is very different the Army Chief pointed out. “Fighting an ideology is difficult and this situation is different from what we faced with the LTTE,” he opined. However, the Army is adapting to the new threat environment. “To mitigate this new threat, we need to adapt quickly and analyse it carefully,” he added, and emphasised the need for continued vigilance.

A week after the Easter Sunday Bombing, the ISIS claimed 2 individuals who blew themselves up when cornered by Police in Bangladesh. They are suspected to belong to a group called Jamaat-ul-Mujahideen Bangladesh, a Bangladesh based ISIS inspired group. As ISIS loses its foothold in the Middle East, their franchises may well attempt to expand their activities elsewhere around the world. 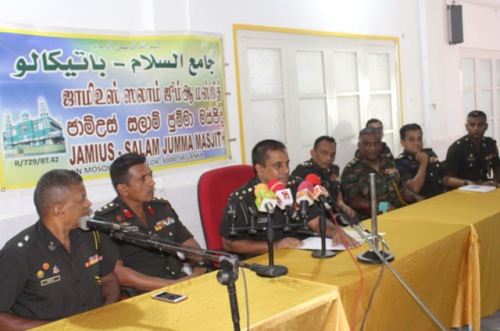