Ceylon University College Dons in 1933: A Photo that is A Treasure Trove

We are indebted to Thiru Arumugam and the latest issue of THE CEYLANKAN produced by the Ceylon Society of Australia for the two photographs reproduced here. I invite readers and old University personnel to provide pertinent bio-data on any of the individuals here who served the University and society over the next few decades.  I will be initiating this task below as time goes by. 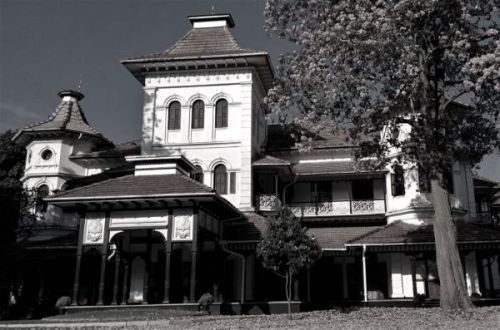 I now add a photograph in front of College House taken in 1947 which displays students and staff and is described as “University of Ceylon Class of 1947.” The only one I can identify is Mr WJF Labrooy from the Department of History seated on the extreme left facing viewers. Here, too, any aid that can be provided with definitive recognition of personnel would be appreciated.

SEE https://en.wikipedia.org/wiki/Ceylon_University_College … for a brief history

Ceylon University College commenced in May 1920 and Robert Marrs succeeded the Director of Education as principal at the beginning of the 1921/22 academic year. “Regina Walauwa” had been purchased from the De Soysa family for this purpose and became known as “College House”.

Cuthbert Amerasinghe and HA Passe (back row) and EFC Ludowyk and B Das Gupta (middle row) were among the dons who continued to adorn this institution when it became the University of Ceylon in 1942 and they remained on the staff when some faculties moved to Peradeniya in the 1950s. Both Passe and EFC Ludowyk, as it happened, were from Richmond College in Galle. Ludowyk promoted theatrical performances in Peradeniya in ways that ramified into Sinhala theatre, while captivating the emerging intelligentsia. After he retired, he produced several works on Ceylon’s history: viz. The footprint of the Buddha (London, 1958); The story of Ceylon (London, 1962);  The modern history of Ceylon (London, 1966) and A short history of Ceylon (London 1967); but may also be known more widely for his Understanding Shakespeare (Cambridge, 1964) — See https://en.wikipedia.org/wiki/E._F._C._Ludowyk

Sidney A Pakeman (1891-1975) was an important influence in the political process of decolonisation in the 1940s and also promoted the academic career of GC Mendis, one of the pioneers of Ceylon history. They co-authored the book Our Heritage. A Ceylon and World History up to 1500 (Colombo Apothecaries Co., 1937).  Pakeman thereafter published a general overview entitled Ceylon: Nations of the Modern World,  (New York: Frederick A. Praeger Publishers. 1964).

GP Malalasekera (1893-1973) was a Pali and Sinhala scholar who produced several voluminous works on Buddhim and Pali –among them the Vaṃsatthappakāsinī : commentary on the Mahāvaṃsa  (edited for the Government of Ceylon and The Pali Literature of Ceylon (1928)

When I went up to Peradeniya in mid-1954 B.B. Das Gupta. was the Professor of Economics…. In 1936 or 1937, he conducted two surveys in five villages (at a time in) in the Putttalam District and the results were published as Sessional Papers by government.  He also served as he Director of Economics Research in the Central Bank and when he retired from the Central Bank, they unveiled his photograph which still hangs in the Bank. He is reported to have quipped ‘ I’m afraid the copy looks better than the original’. Rambukwelle Siddhartha taught Sinhala at SOAS (?) and came here after Ratnasuriya became the Professor of Sinhala. He was reputed to be able to sing Vannam beautifully.

Dear Michael,  ………………..I am fascinated by the 1933 photograph of Ceylon University College Dons. The guy named JPC Chandrasena, seated on extreme right between Hinton and Burt, is Juan Pedige Charles Chandrasena, who joined the College in 1922 as Lecturer in Chemistry and was Professor of Chemistry in 1933 when this photograph was taken and retired in 1934. His portrait painting among three others has been restored by me as a labour of love for the Dept of Chemistry, University of Colombo. I will forward some photos taken of these paintings.

Standing in the middle row at extreme right and between Revd Jansz and JLC Rodrigo is Eric L Fonseka who was a lecturer in chemistry at that time and was a Professor of Chemistry from 1951-1963. I have restored this painting as well.

The guy named as LD Smith was a lecturer in physical chemistry and is seen standing in the middle of the last row. As you probably know, Prof Nigel Ball taught Botany, AW Mylvagnam taught Physics, and I think Pakeman taught History.

A NOTE from Fr. ALOYSIUS PIERIS of the TULANA RESEARCH CENTRE, 12 September 2019

This is an important souvenir, because the next issue of Dialogue NS,  (45 year-old Journal of which I am the Chief Editor ) focuses on the crisis of  University education at present. This set of presentations arose out ofa seminar organised by Mr Marshal Perera (Directoe EISD and co-editor of  Dialogue).

When i saw this picture of the octogenarians I felt  that you (as a historian) should have been involved in this seminar because you are familiar with the history university education in SL and would been an asset at that seminar (which I could not attend).
I now wish I had asked you to contribute to the special issue of Dialogue (now in press). Its on the verge of going to the press, it is too late ask for your piece. I regret it.

A NOTE from CHANDRA SCHAFTER 20 September 2019

I had a brief but enjoyable year in the university in 1950 trying rather unsuccessfully to pass my first MB (entrance to the Medical College).  I failed miserably, but I enjoyed myself greatly winning my cricket and hockey colours as a fresher and playing in two teams that were almost the top of the rung.  With a little luck, we would have entered the final of the P. Sara which the Tamil Union eventually won, and also have won the hockey championship.  The hockey team had nine Thomians except for the goal keeper Bandula Weeraratne and Brian Forbes, the Captain.  In the cricket team too the Royalists and Thomians outnumbered the rest.  Ronnie and Bradman Weerakoon, Arasakumar, Duleep Kumar and Shanthi Kumar, Wally May, C.D.L. Fernando, Rudy Wickrematilleke, Gilli Jayasuriya, T.L. Pereira, Bala Ponniah and myself.  I think Andrew Nanayakkara was the odd man out.

[This photograph inspires memories and the follwoing associations:] Kirthisinghe I think English, H.A. Passe, A.W. Mailvaganam Physics, W. Fernando Zoology,Baliga Physics, Mailvaganam Physics, W. Fernando Zoology. Rev. Kingsbury I think was Tamil, Prof. Ludowyk needs no introduction, B.L.T. de Silva I think Botony, P.C. Sarbadhikari, S. Nadaraser was the famous Mathematics Professor, father of Pararajasingham and Jayasingham, whom you may have known, Rev. P.L. Jansz who was vicar of St. Pauls’ Milagiriya and was supposed to known 12 or 14 languages, E.L. Fonseka lecturer in Chemistry, J.L.C. Rodrigo who again needs no introduction, and D.P. Das Gupta who I think was the Econimics lecturer.

Seated : Prof. Gulasekharam, the famous one with about 12 children, who all distinguished themselves, Prof. G.P. Malalasekera, Vije’s father, W.N. Rae, I cannot remember what he taught but he was there.  I cannot remember the others.  It is probable that the ones seated were the most senior and had left by the time I entered university.  They were all giants in their own way, and I think those who passed through their hands benefited greatly.

A NOTE from GERALD PEIRIS of Peradeniya University & Kandy, 21 September 2019

This photograph is a real treasure, containing as it does photos of several pioneers of the Arts Faculty at Peradeniya in their youth (or early adulthood): viz,. Amarasinghe Passe, Ludowyk, Nadaraja, Rodrigo, Malalasekera, Rae and Das Gupta.

Cuthbert Amarasinghe led a delegation of senior dons to meet Dudley Senanayake (the PM in the late 1960s) in order to request that we be permitted to retain the name “University of Ceylon” as its founders intended.  I went along as the acolyte (i.e. Secy of the All-University Teachers’ Association). Cuthbert made a brilliant case for our request. At the end of a most cordial meeting in the course of which he pretended to support our request, Dudley said, just before we left, “I cannot forget the fact that Peradeniya and Gal Oya were my father’s pet projects”. The only explanation I have for his letting us down was the humiliation he suffered in 1962 at the Arts Theatre.

5 responses to “Ceylon University College Dons in 1933: A Photo that is A Treasure Trove”