Extremist Fervour as Roadblock for Reconciliation: A High Profile Example from the Galle-Lit-Fest

RK Radhakrishnan, in The Hindu, 2011 (?) … https://www.thehindu.com/books/books-reviews/reconciliation-elusive-on-the-ground/article6164031.ece

The packed hall at the Galle Literary Festival was stunned into silence by a series of abuses hurled on a Sri Lankan human rights activist by a member in the audience. The hurler of abuses, a well-known journalist, questioned the activist’s patriotism, labelled her pro-Tiger, and described her as a ‘stooge’ of the Western nations. Oh yes, that was just the printable part.

The activist at the receiving end was Sunila Abeysekera. She was one of the panelists on ‘Aftershock: The lingering legacy of civil war,’ presented by the BBC World Service. Nigerian novelist Chimamanda Ngozi Adichie, and event moderator Bridget Kendall (BBC’s diplomatic correspondent) were on stage. The exchange presented a clear idea of the differing perceptions on the concept of reconciliation.

Sunila elaborated on the collective grief of entire communities, and described the hurdles that stood in the way of reconciliation – an absolute essential to ensure peace.  “Muslims still observe the day they were driven out of Jaffna; the days on which hundreds of their brothers were massacred in two mosques while Tamils remembered the kidnappings from the Batticaloa hospital. The Sinhalese remembered the killing of 600 policemen in the eastern province. This is a clear indication of how far we need to go to overcome the collective grief of the communities,” she said. (The Hindu, January 28, 2011).

If one made an effort to understand the point that the protesting journalist was trying to make, one would understand that his short point was that the country had just emerged from a debilitating conflict with the Tamil Tigers and every citizen should stand firm behind the State. Outside actors were trying to dismember Sri Lanka and every true Sri Lankan should unite. The simplicity of his logic was hard to beat, but the only point he glossed over was his definition of who is a Sri Lankan. Sunila’s painstaking explanations had no bearing on him: he was convinced of the Sri Lankan state’s new narrow definition of equating Sri Lankanness with exclusively the Sinhalese. Dissent was put down in the name of the foreign hand, a nightmare of a phase in the existence of any nation: India had gone through this during the infamous Indira-Emergency years.

As a natural extension of stifling dissent in the name of national security, the definition of reconciliation is reduced to progress made in infrastructure building in the Northern Province ever since the end of the war in May 2009. The carefully worded statements tailor-made for a barely-interested international audience, ahead of the UNHRC sessions, push the definitions of reconciliation into an essentially Made-in-Sri Lanka strait-jacket, and link it to lack of violence, availability of services, and progress of development works. When the State seeks to link reconciliation with overtly physical progress, its apologists follow. Defining reconciliation hence become a tricky proposition: The moment you define, you would have answered the State’s question ‘are-you-with-us-or-are-you-against-us.’

It is against this backdrop that the International Centre for Ethnic Studies, a Colombo-based non-profit which works largely on issues in ethnicity and identity politics, has published a study on ‘Reconciliation in Sri Lanka: Voices from former war zones.’ It is a commendable effort at understanding the post-war reconciliation process at the ground-level. The aim is to record people’s expectations and add to the discourse on reconciliation in Sri Lanka. ICES says “the study used a pluralist research methodology comprising a series of in-depth interviews and dialogue sessions with communities in the former war zones combined with a survey of 600 respondents in 6 districts in the North and East.”

One important question chronicled in page 133 drives home the wedge that exists between Sinhalese and other communities. The question: according to your opinion, how do you describe the past 30 years of war? An astounding 53.7 per cent of Sinhalese said it was a terrorist problem (13.4 per cent Tamils, and 17.6 Muslims also felt so), while a majority of Tamils (66.4 per cent) and Muslims (61.8) surveyed insisted it was an ethnic conflict (only 5.8 per cent of Sinhalas surveyed thought so). Yes, the sample size is small, but this is indicative of where the Sri Lankan government needs to begin its work from. Several such crucial questions throw light on the attitude and state of mind of the ‘conquered’ which is an invaluable input for countries that want to put pressure on Sri Lanka to achieve genuine reconciliation.

As the book puts in succinctly: the war is over, but the conflict is not.’ The overwhelming presence of the Sri Lankan military is of serious concern and this has often been brought to the notice of the President and his government by many, including India. But there has barely been any change. 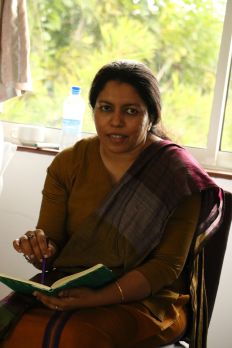 When this item was placed on FACEBOOK it drew responses from one of the protagonists in the tale above, viz, Rajpal Abeynaike who denied the allegations in the Radhakrishnan article [while also latching onto a typing mistake on my part in the FB entry]. The exchanges that followed are pertinent to our reflections and bring Radhakrishnan’s interpretations into question.

I remember saying Sunila, you pretend to be part of the solution, but you are part of the problem. Nowhere ever have I said or suggested that to be Sri Lankan one has to be Sinhalese or anything close to that. There was no abuse printable or otherwise of Sunila at the GLF, and my complaint to Sunila on that occasion was that she was exaggerating so called human rights abuses of Tamil civilians, a legitimate observation under any circumstances.

But I’m used to this kind of fake news. Anybody who dare say a word about alleged human rights abuses of Tamils and pointed out that some of these charges were highly questionable have been vilified, mostly in unprintables, for obvious reasons.

I would try to obtain the recording of this exchange at the GLF, where Sunila refused to answer … presumably because she didn’t have any real plausible retort.

Fake news of the common but utterly shameless kind, and shame on whoever penned such a load of vile, concocted nonsense.

Many PIX in Thuppahi are taken from other sites/occasions to emphasize the tales. Sunila’s PIX too was obviously from elsewhere. The ISSUE which readers face NOW is whether RADHAKRISHNAN’S tale or [Abeynaike’s] recounting is the reality or not.

There is no issue. It’s a blatant lie, end of. It’s preposterous and even you [Roberts] should realize this. A series of abuses hurled at …. says the writer. A series of abuses? It was one short sharp question/observation to which late Sunila had no answer. Do you think the moderators would allow a ‘series of abuses.’ Come on, you’ve been at GLF too.

If you think it’s an issue and want to continue to flog a dead horse so be it. Good luck with that.  Note: Emphasize the tales indeed! Tall tales and other tales.

One response to “Extremist Fervour as Roadblock for Reconciliation: A High Profile Example from the Galle-Lit-Fest”