An Act of Consciousness Raising: The Concept ‘Pogrom’ and its Extension to Sri Lanka

My recent use of the term “pogrom” to mark the constellation of events in mid-1915 that were (are) commonly referred to as “riots”  has been challenged on Facebook by a Sinhalese ideologue named Amare Kodikara[1] (who has not taken the trouble to read the original articles in 1994 on which this usage was based).[2] I am therefore placing the relevant segment from the pertinent article in the web-domain once again as Segment Two in this article.

END_OF_DOCUMENT_TOKEN_TO_BE_REPLACED 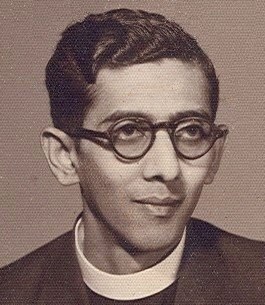 The World Council of Churches (WCC) [partnered] in organising the 13th annual conference of the European Network of Buddhist-Christian Studies to commemorate the birth centenary of Lynn A De Silva, a pioneering figure in Christian-Buddhist dialogue. The conference, which is considered one of the most high-profile international conferences on crucial issues within the Buddhist-Christian encounter, [took place] at the Arch Abbey of St Ottilien, near Munich, Germany from 27 June–1 July 2019.

END_OF_DOCUMENT_TOKEN_TO_BE_REPLACED

Decline in Tourism and the Blame Game: Where Sinhala Buddhist Extremism is a Major Ingredient?

If you have invested in Sri Lanka’s tourism and hospitality industry, then it would serve you well to keep up with the international media coverage of Sri Lanka in recent weeks. The island nation’s reputation has taken a massive beating and it’s unlikely tourism will pick up any time soon. There is no point blaming the foreign media and claiming there is some conspiracy against Sri Lanka, and puff pieces promoting tourism by the Ministry of Tourism and other social media campaigns are pointless and won’t convince many outsiders to take the risk in visiting.

The international media is highlighting the terrible actions of some in the Sinhalese majority, and the violence and discrimination unleashed by Buddhist extremists for decades. The Easter bombings aren’t being solely blamed on Muslim extremists by the international media, they are focusing on the incompetent Sri Lankan police and military who failed to prevent the attacks, despite possessing intelligence beforehand to do so, and also for having caused a situation in Sri Lanka where religious and ethnic minorities are not protected.

END_OF_DOCUMENT_TOKEN_TO_BE_REPLACED

Bharhut Stupa: Its Significance in the History of Buddhism

Bhante Dhammika of Australia, in Island, 14 August 2019, where the title runs “Bharhut Stupa; Majesty and Mystery”

The British Major had ridden for days from Allahabad while on his way to Nagpur and had arrived in the small village of Bharhut just before sunset. That evening while resting in a villager’s house he noticed some carved stones paving the floor and suspected that they had been taken from some ancient structure. Inquiring about this he learned from his host that there was a half-buried ruin a little beyond the eastern edge of the village. So in the morning the major went to have a look at this overgrown mound of bricks and stone. The time was November 1873, the major was Alexander Cunningham and he was about to stumble upon one of the most important archaeological discoveries ever made in India and one that is testimony to the artistic genius of the early Buddhists.

END_OF_DOCUMENT_TOKEN_TO_BE_REPLACED

Anti-Muslim Violence Present and Past

Shamara Wettimuny, in Sunday Observer, 14 July 2019, where the title is “A brief history of anti-Muslim violence in Sri Lanka”

The recent Easter attacks targeting a number of churches and hotels devastated Sri Lanka. Over 250 people were killed, and many more injured. Within days of the attack, it emerged that the perpetrators of the attack were affiliated to radical Islamist groups in Sri Lanka. However, the identification of the perpetrators as ostensibly adherents of the Islamic faith opened the floodgates of discrimination and violence against the broader Muslim community in Sri Lanka.

END_OF_DOCUMENT_TOKEN_TO_BE_REPLACED

The Force of the Moors. Reflections Historical and Ethnographic

“The Portugese, the Saviours of our Culture?” = This is the title of a scholarly article written in the Ceylon Historical Journal in the 1950s by B. J. Perera BA (History) University of Ceylon who was our teacher in the University Entrance class. It was of course “dead against” the version given by nationalist historians after independence. However his interpretation simply put was that the Mughals had conquered Hindu India and ruled it for a couple of centuries and converted a large part of the Hindu population to the Muslim religion as had happened in countries such as Indonesia and Malaysia and the Maldives, which had been either Hindu or Buddhist. The evidence in Bali and Java of the existence of Buddhist and Hindu relics supports this view.

Mattayaas in the Gal Oya and Eastern Province interior

END_OF_DOCUMENT_TOKEN_TO_BE_REPLACED

A Review of the Book BUDDHISM TRANSFORMED

Premkumara De Silva,** in The Midweek Review of The Island, 17 May 2005, where the title runs ” Anthropology of ‘Sinhala Buddhism’ “

The disciplinary identification of “Buddhism” in Sri Lanka as an anthropological object began in the late 1950s as part of a growing field of “peasant” or village studies in South and Southeast Asian societies. In Sri Lanka, the work of Gananath Obeyesekere, Edmond Leach, Michael Ames, and Nur Yalman is central to this inaugural moment. These anthropologists have identified the integration of the diverse beliefs and practices of Sinhala Buddhists within a religious worldview that is in accordance with fundamental Theravada Buddhist teachings. Within this academic exercise Obeyesekere insisted on the term “Sinhalese Buddhism” to convey the idea of full variety of religious practice, popular and esoteric, in Sri Lankan Buddhism. He argues that Sinhala Buddhism should be seen as “a single religious tradition”, and not as composed of separate “layers” to be analysed in isolation from each other. 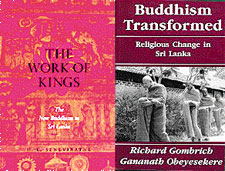