Bracegirdle and the Early LSSP in Anti-Colonial Thrusts

Vinod Moonesinghe, courtesy of Roar, 21 May 2017, where the title reads “Bracegirdle: The Young Anglo-Australian Behind Sri Lanka’s Independence Struggle”

After the Matale Revolt of 1848, the independence struggle in Sri Lanka was quiescent until the 1930s. Only in 1931 did the short-lived Jaffna Youth Congress call for total independence (poorana swaraj) and boycotted the general election.However, in far-away America, a young Sri Lankan student, Philip Gunawardena, had already joined the League Against Imperialism and For National Independence, an international organisation committed to the complete national independence of the colonial and semi-colonial peoples, including Sri Lankans. He later went to Britain and worked for the League. He belonged to a Sri Lankan group called the “Cosmopolitan Crew”, mainly students such as himself, including N. M. Perera, Colvin R. de Silva and Leslie Goonewardena.

END_OF_DOCUMENT_TOKEN_TO_BE_REPLACED

This article is an effort to pull out international and national norms applicable to those working in diplomatic missions and by extension having diplomatic status. Although the emergence of diplomatic protections stretches back to antiquity, they are largely codified into law in the modern era. These protections are based mainly on the 1961 Vienna Convention on Diplomatic Relations and the 1963 Vienna Convention on Consular Relations, with the former regulating conduct with top diplomats such as embassy staff; and the latter lower-rank diplomatic officials.

Why are diplomats, no matter how sensitive their job, conferred almost limitless immunity from law? The answer goes centuries back.

The Vienna Convention on International Relations

END_OF_DOCUMENT_TOKEN_TO_BE_REPLACED

Paul Monk in The Weekend Australian,23 November 2019 with this title “Keating rides roughshod over reality of China’s aims” …. with highlighting emphasis by The Editor, Thuppahi

At The Australian Strategic Forum in Sydney on Monday, the keynote was struck by Paul Keating. The position he took was very much in character. It very much needs to be challenged. Much of his address consisted of statements of the bleeding obvious. But he mingled these commonsense observations with a litany of others that were seriously in error.

Former prime minister Paul Keating speaking at The Australian’s Strategic Forum: How should we manage our relationship with China? in Sydney on Monday. Picture: Nikki Short END_OF_DOCUMENT_TOKEN_TO_BE_REPLACED

Pictorials: Platform Poses and the People-in-Front

READER QUIZ:   Impose your captions for these PICTURES …. COMIC!@##! or DEADLY SERIOUS

END_OF_DOCUMENT_TOKEN_TO_BE_REPLACED

Manoj Colambage in Sunday Observer, 19 May 2019, where the title is “The Bulathwatte Bewilderment”

The reinstatement of an army intelligence official implicated in attacks on journalists has given rise to serious concerns for the safety of media personnel and witnesses who testified against the officer and his platoon.

Army Intelligence Major Prabath Bulathwatte has been back in the spotlight after Army Commander Mahesh Senanayake stunned civil society in a television interview last week, announcing that the officer, who was interdicted for allegedly running the white van squad responsible for a slew of attacks against journalists, had been reinstated into a team under Senanayake’s command to combat radical Islamic terrorism.

END_OF_DOCUMENT_TOKEN_TO_BE_REPLACED

The International Crisis Group under the Microscope … in 2014

Berit Bliesemann de Guevara, in MATSUSAS, 12 September 2014, where the title runs “Reading the International Crisis Group or why think tank reports have to be taken with a pinch of salt” …. with highlighting empasis veing the work of The Editor, Thuppahi 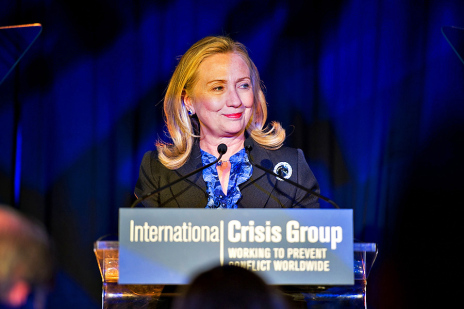 Recently the New York Times caused turmoil among prestigious and influential US think tanks when it published an investigative article about concealed connections between these non-profit research organisations and a broad range of foreign countries, among them Norway, Japan, Saudi Arabia and Qatar (NYT online, 6/9/2014). The article revealed that leading think tanks like the Center for Global Development, the Brookings Institution and the Atlantic Council are receiving funding from foreign governments in exchange for influence on the organisations’ recommendations to US policy-makers. The article criticized this practice for its lack of transparency and the supposed loss of intellectual freedom and objectivity. ‘The money is increasingly transforming the once-staid think-tank world into a muscular arm of foreign governments’ lobbying in Washington’, the authors cautioned. The attacked think tanks rejected the accusations, pointing to ‘credibility’ and ‘scholarly independence’ as their major ‘currency’, although one interviewee admitted that self-censorship could be a future problem because in times of dwindling funding sources, saving one’s job could well trump the urge to be critical.

END_OF_DOCUMENT_TOKEN_TO_BE_REPLACED

A History of Political Machinations directed against Nagananda Kodithuwakku

Victor Ivan, in Ravaya, where the title is “Barring of Nagananda Kodituwakku from Practicing Law”

The Supreme Court has issued an order barring Nagananda Kodithuwakku , Attorneyat-Law and  Public Interest Litigation Activist who has entered the  political arena of Sri Lanka as a prospective presidential candidate, from practicing as a lawyer for three years. I think it is important that we assess Kodithuwakku’s role in the light of this incident.