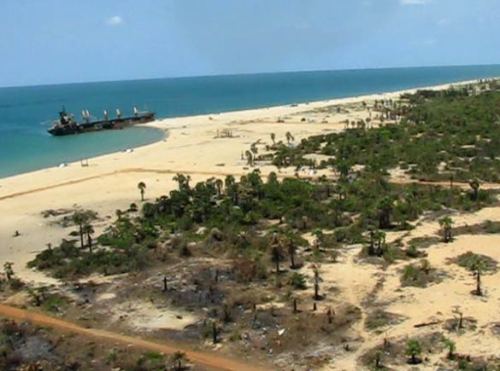 A fuller range of images organised under topics can be located at http://www.flickr.com/photos/thuppahi/

Times Aerial Images of the Coastal Strip that was Pirapaharan’s Last Stand, circa 23 May 2009

These aerial photographs were taken on the 23 May 2009 by a Times cameraman who was accompanying the Ban-Ki-Moon entourage on his inspection tour of Sri Lanka after the defeat of the LTTE as a military force in May 2009. They are quite helpful in enabling one to get some insight into the degree of damage and the nature of the terrain in what I prefer to call “the Last Redoubt.”

It was also defined as a “No Fire Zone” by the government quite early in the last stages of the war, perhaps, in March. In my view as amateur military analyst this was a silly move in a warring context with rapidly shifting boundaries. However, this act may have encouraged more and more people who were “kept in bondage “ (DBS Jeyaraj’s phrase –rather overstated) to move there and build “a tent city.” In any event once the LTTE shifted its command centre to this area it could not remain an arena beyond shellfire.

I am addressing the topics of (A) the  battlefield landscape and (B) the character of “devastation” in essays that are in the pipeline. Pictorial images are central to this approach so this side column in the THUPPAHI SITE will serve as expanded resource base for articles that cannot be cluttered with too many illustrations. 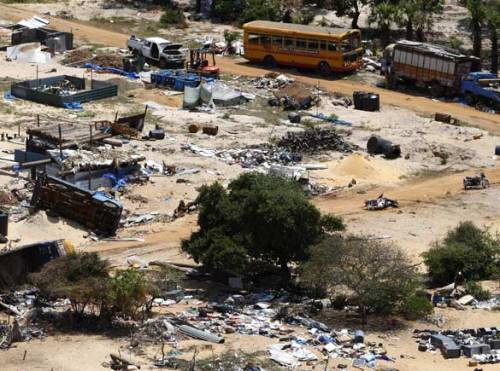 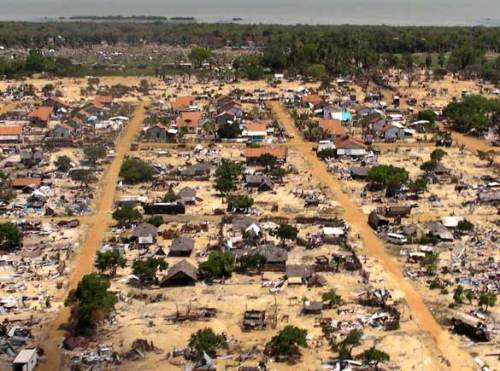 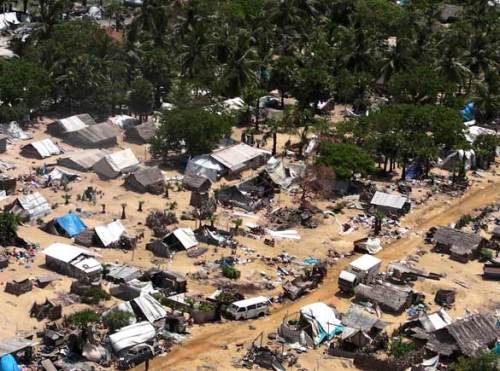 The Sri Lankan government kept a tight lid on the foreign media personnel allowed into the war zone. This is hardly surprising. If one was a company commander at the battlefront seeking to best the LTTE forces in front of one’s troops it would be pretty silly to have personnel with mobile phones reporting back to whoever-back-in-office in circumstances which could be intercepted and relayed within minutes to one’s enemy. As it is, the remarkable DBS Jeyaraj in Toronto sometimes had information of the type an embedded journalist among the Tigers might have supplied one or two days after a major incident (for e. g. the ambush suffered at Aanandapuram in early April).

Because Western media were mostly kept out, a cliché appeared on the air waves in 2009: Eelam War IV, it was stressed, was “a war without witnesses.” In late May 2011 Gordon Weiss repeated the same phrase in the course of a two-minute interview with the Australian Broadcasting Corporation (a rare privilege for anyone).

This terminology was, and is, not intended to be taken too literally. After all, the same sources cite the testimonies of Tamil witnesses speaking about the bloodletting in the course of the last five months of the war. What is being suggested and highlighted in this popular sound-bite is the fact that the GOSL kept out foreign journalists so that its atrocities (alleged) would not see the light of day.

The latter claim is a tendentious and contentious issue that I cannot address here. But it is significant that Weiss and others have not got their facts fully right about the media coverage. Let me begin with two ‘minor’ examples that contradict that message. (A) In April 2009 I recall seeing David Chater, an Englishman reporting for Al-Jazeera, providing commentary with video footage from naval ships parked on the sea battle front opposite the so-called No Fire Zone which was the last arena of struggle. (B) A body of journalists, including several foreigners, were taken to the Tigers’ former administrative capital of Kilinochchi in January immediately after it was captured, clearly as part of a governmental propaganda exercise. A note on this moment reveals that the propaganda impact was effective: “The Colombo based media contingent, including the international correspondents, who were flown to the town two days after it fell into the hands of military were surprised to note that very few concrete structures in the city had suffered any kind of damage.”[1] But, as Muralidhar Reddy notes, it was not difficult for them to work out the fact that the LTTE had decided upon a tactical retreat after the junction of Paranthan had been lost.

The sweeping and fallacious character of the assertion, “a war without witnesses,” derives from the manner in which the Hindu correspondent Muralidhar Reddy was able to visit the front on several occasions in the period October 2008 to April; and in the course of these visits interviewed around 80 Tamil refugees who had managed to escape the LTTE clutches. His last visit in April was with a contingent of foreign journalists, including several Westerners and at least one working for Al-Jazeera. It was on this occasion when the reporters would have seen the arrival of some of the 120.000 or so Tamil civilians and Tiger cadres in civilian clothes after the intricate defences of the LTTE’s last stronghold on the western shores of Nandikadal Lagoon were breached on the 19thApril and thousands streamed and/or struggled out. I was in Colombo then and saw at second-hand some of the footage presented by pro-government Lankan media personnel.

Depiction of this wonderful moment of human escape from the furnace of war (for those who reached safety) demands literary skills that I do not possess. Even still photographs cannot fully capture the mass effect though they are useful. That many of these survivors were in dire state of malnutrition and exhaustion was evident and subsequently confirmed by Murali’s evaluation of their condition as well as some indications that a few had died in transit to the MSF hospital or the staging locations around Vavuniya. As momentous in my memory was the virulent criticism of the LTTE expressed by one woman and one weather-beaten man speaking in Sinhala to a TV cameraperson.

It was immediately after this miraculous moment that I met Murali in Colombo. He was quite positive that the civilian casualties during this episode had been light. Knowing him and his critical views on government policy in the period 2006-08, I cannot entertain any ad hominem arguments seeking to sideline his witness, especially if they are from self-righteous crusaders or Westerners who will only trust persons of their own persuasion (and sometimes their own skin-colour). They will have to show due cause for any allegations of partisanship and have to indicate how some 120,000 people, including Daya Master, George Master and numerous Tiger fighters in civilian outfit, could have emerged from the battle zone if there had been massive shelling.[2]

As significant was the witness provided by Muralidhar Reddy and Kanchan Prasad when the two Indians were the only foreigners among a large posse of local media personnel who were taken to the Kilinochchi on the 14th May.[3] Kanchan Prasad was not the only woman, there being two others within the Lankan ‘brigade’. Kilinochchi served as their base because that was where internet connections were available; but Prasad and Reddy travelled to the Last Redoubt across the Lagoon on every day from the 14th to 18th May inclusive. Prasad was the cameraperson and it is her snapshots that provide us with vistas of the debris and flotsam of war on this sandy 42 square kilometre patch of land with its scrub, trees, and several buildings, a significant proportion of them intact or slightly damaged.

Selections from this camera work are provided here to give readers some impression of the scenario so that they can begin to break free from the fog of deceit and misreading that has been peddled and disseminated by a number of sources, some quite well-meaning human rights personnel and others manipulative or ill-informed migrants (both Tamil and other) abroad. These pictures must be seen as a beginning and nothing more. Careful probing of the testimonies from Tamils who were part of the 180,000 or so who survived the ordeal of war between the 18th April and 19th May must be the larger part of this study. Particular weight must be attached to the testimony[4] of former Tiger cadres who have gone through the rehabilitation process and are trying to return to the normalities of everyday living.[5] Those Tigers (reckoned to be at least 500 in number, but perhaps more), whether functionaries or fighters, who successfully posed as civilians and then slipped out of the detention centres at Manik Farm and made their way abroad as asylum-seekers[6] will be a more problematic source of information because their ideology and circumstances would encourage disinformation. But that is another terrain metaphorically speaking. For now we must be grateful to Prasad and Reddy for their invaluable ‘footage.’

[2] “The bulk of the blame for the civilian killings would go to the LTTE as it is the Tigers who took them in the hope that such large numbers is their best bet against an all out offensive. … In the last days of the war too at least 50,000 civilians/cadres-turned-surrenders walked over to the military. Among the last batch of the civilians included parents of Velupillai Prabhakaran” (email note, Reddy to Roberts, 3 June 2011).

[4] Other than Rohan Gunaratna’s reference (1 June 2011 at the Defence Symposium) to his interviews, I am not aware that anyone who has tapped this source of information on the last stages of Eelam War IV. 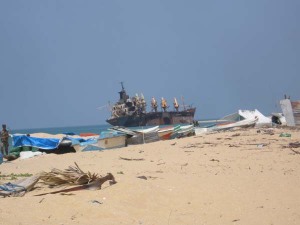 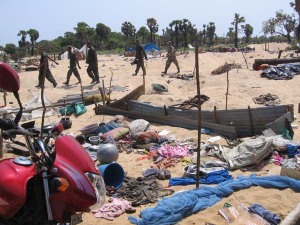 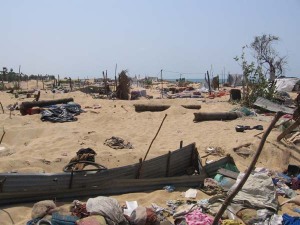 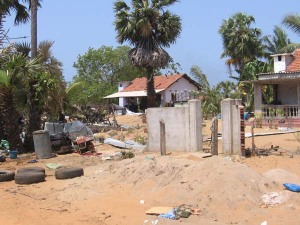 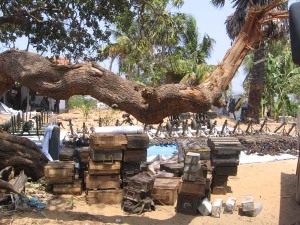 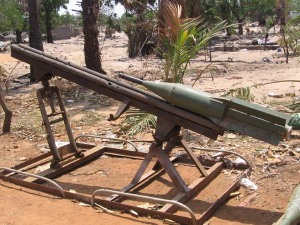 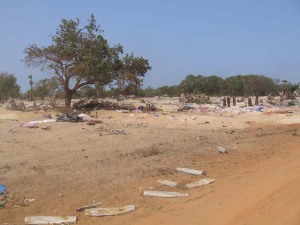 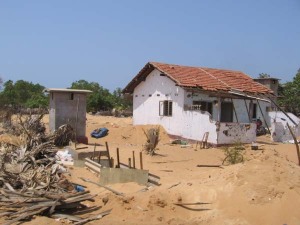 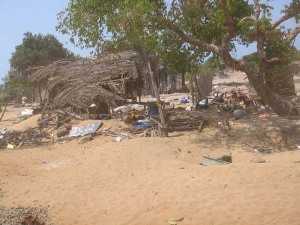 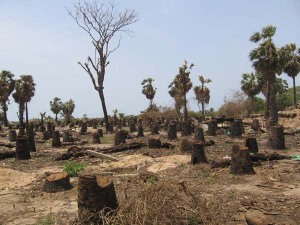 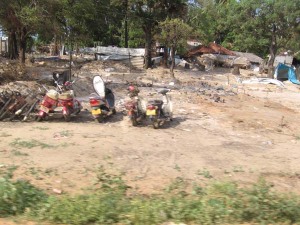 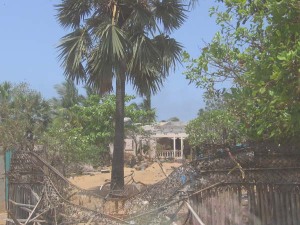 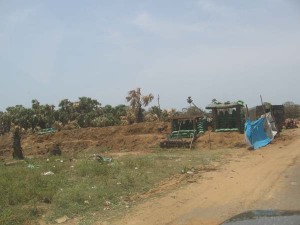 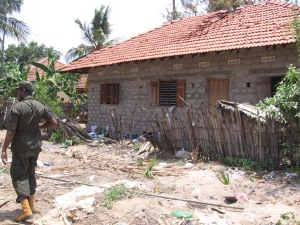