Speaking to Gotabaya-I: Plans Afoot in 2009 to Rescue the Tiger Leadership

Michael Roberts, courtesy of Colombo Telegraph, where the title is different

I am deeply entangled in drafting an article entitled Saving Talaivar Prabhakaran, an effort that has involved several revisions and is now being subject to further embellishments in the light of Mark Salter’s presentation of the Norwegian spin on events in the last stages of Eelam War IV.[1] A chance inquiry from a friend put me in touch with the former Defence Minister, Gotabaya Rajapaksa on Skype telephone yesterday Monday 7th May.

Pirapāharan on an Indian plane in August 1987 bound for Jaffna

I was in pursuit of a specific piece of information relating to the Norwegian-cum-American exploration of pathways that could extricate the Tiger leaders from Sri Lanka,[2] while saving the Tamil civilians in danger. Salter tells us that in late February the Co-Chairs in Colombo mulled over the possibility of mounting “a sea-directed rescue mission” and “a high-level team from the United States Pacific Command (PACOM) headquarters in Hawaii” visited [Sri Lanka] to evaluate the logistics of such an exercise” (Salter 2015: 354). I wanted the date of this visit and other relevant details.

This image of Bob and Gota in conversation is from December 2009 when Blake had moved higher up the chain of command—www.asiantribune.com

Gotabaya Rajapaksa was not aware of such an enterprise and responded to my surprise by indicating that these military men could have been inserted into the island through Sri Lankan embassy channels.[3] However, he went on to highlight a key moment in the American efforts to extricate the LTTE command and halt the ongoing conflict. This was when Ambassador Robert Blake with whom he was on friendly first name terms as “Bob” called at his office [presumably in the Defence Ministry] one evening at 5.00 pm.

Blake had indicated that there were plans afoot to rescue the Tamil civilians trapped in the coastal NFZ by sending a ship. The conversation had then taken the following trajectory.

GR had been highly sceptical about the Tiger leaders agreeing to this idea and asked: how can one prevent Tiger personnel mingling with the civilians and escaping?

RB: Your people can be on the ship to monitor the process.

GR: What about India? Will the Indians agree?

RB: We will speak to the Indians.

GR had then alluded to Rajiv Gandhi’s attempt to force the LTTE hand and the outcome that emanated from this process as a foundation for an assertion to Blake that “the LTTE would never agree to such a proposal.”

RB: “We are Americans. We will teach them a lesson and even bomb them if need be.”

Gotabaya Rajapaksa, alas, could not recall on what day this exchange occurred, though he could remember the time and place. This is not surprising – for I find this specific form of memory lapse to be of increasing frequency as I age. In any event, we should be able to work out the date – in April 2009 I believe – when this important exchange occurred.

Rajapaksa indicated that he discovered that Blake had immediately proceeded to meet the Indian ambassador in Sri Lanka, Alok Prasad, that very evening. While he did not know what transpired there, it so happened that Prasad had a breakfast meeting with President Mahinda Rajapaksa the next morning. President Rajapaksa, taken by surprise by the tale of international plans of intervention, had phoned his Foreign Minister Bogollagama who had then phoned Blake.

When precisely did this conversation take place? Guided by the US embassy despatches released by Wikileaks, there are two possibilities in my mind: 10th April or 15th April.

One despatch[4] indicates that Blake met Bogollagama on the morning of 11th April to “discuss U.S. concerns about shelling of the civilian safe zone, and the ideas of a humanitarian pause and of a UN Special Envoy.” Blake had “pointed out that it was common knowledge the Tamil Tigers won’t let the civilians go. A better alternative, he said, would be for the GSL to allow a UN envoy to go in to the safe zone during the pause to talk directly to LTTE supremo Prabhakaran about terms for letting the civilians go and surrender of those LTTE cadres still in the safe zone” (Blake’s report to Washington).

After continuing to detail the further cajole and pressure that seems to be integral to big-power diplomacy, the dispatch notes that Blake told the Foreign Minister that “large civilian casualties would also have serious longer-term consequences for the GSL [so he had] sought Bogollagama’s personal intervention in raising these issues in the National Security Council meeting [scheduled for that evening].” The National Security Council announced a unilateral two-day ceasefire on the 12th/13th April to honour the local New Year ritual period, but did not abide by the US demand for a longer term.

The 15th April was also the night when Vijay Nambiar, Chef de Cabinet and UN Under-Secretary under Ban Ki-moon, reached the island to have a series of meetings designed to explore ways of ending the conflict in an “orderly and peaceful way.” [6] This step was, in fact, a move signaled by Blake on the 10/11th April and indicates the degree to which the UN bureaucracy were the lap-dogs of US policy – thereby presenting a halo of peaceful internationalism to those in the world who are gullible.

Gotabaya Rajapaksa had another revealing insight on this issue, all the more powerful because it came out of the blue incidentally during the course of some other issue within our chat. Nambiar, he said, was someone who tried to “secure another life for Prabhakaran.”

It seems to have been at this point, in mid-April 2009, that whispers about the Norwegian/American rescue plans entered Sri Lankan media channels (whether from Bogollagama’s ministry or Sri Lankan military sources is not certain). These burgeoning tales alarmed the US Embassy. When a Western reporter phoned the embassy, the alarm bells within were such that he was immediately asked to come in and chat. He found that the US officials believed that they faced “a non-permissive environment”[7] confronting any forceful intervention – a form of American-speak which is as precise as pin-point accurate. USA had learnt a lesson from the disastrous international consequences and humiliations arising from its military sortie in Somalia in October 1993 – since immortalized in the film Black Hawk Down.[8]

Gotabaya Rajapaksa indicated that very few people were cognizant of Bob Blake’s chat with him and its matter-of-fact amiable tenor. When I inquired if Blake’s approach had been a “threat,” he responded: “not at that time.” He added: Blake had no clue regarding the military aspect of any rescue operation. In other words, Rajapaksa implied that Blake’s nous about battlefront circumstances was minimal.

That sort of analytical failing, I add from my engagement with Eelam War IV and its repercussions,[9] has been a major problem in addressing the knotty issues arising from that war. The vast majority of activists, including high-profile commissioners, making assessments about the war have been desk intellectuals and drawing room lawyers without first-hand or even vicarious comprehension of warfare and its intricacies.

Pirapāharan , Anton Balasingham, KP and Sorna I at Mullaitivu during the LTTE’s halcyon days, circa 2001 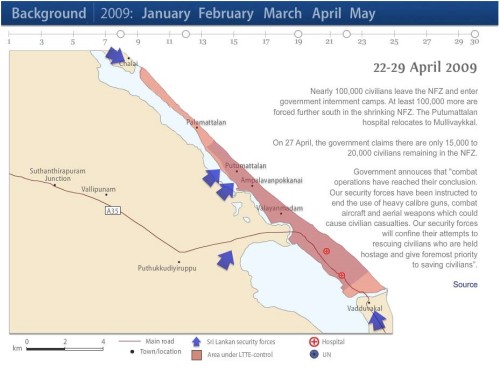 ICG Analytical Graph of the remarkable military operation which penetrated the Last Redoubt of the LTTE with its defensive formation of some three lakhs of Tamil civilians in their role (metaphorically) as sandbags ……. resulting in the exodus to safety of some 120,000 civilians and deserting Tiger fighters over four days 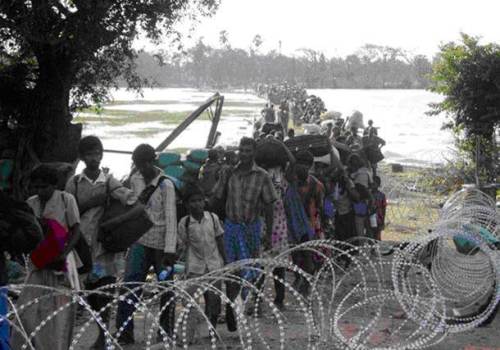 [3] This in itself raises more questions than it answers. Who did these military men tap and discuss possibilities with?

[7] I am not free to divulge this source.

21 responses to “Speaking to Gotabaya-I: Plans Afoot in 2009 to Rescue the Tiger Leadership”