At 7.28 pm on the 17th September 2009 Jim Macdonald of Amnesty International in USA posted an article “Sri Lanka: international investigations still needed” within the official AI web site. This immediately attracted a vibrant series of blogs that invariably involved a great deal of cross-talk of varying degrees of considered speech, juvenile riposte and abuse among bloggers who were anti-government, pro-government and/or relatively non-partisan.[1] Macdonald was invariably measured and polite in his responses and tried to answer most of the responses.[2]

Taken as a whole this corpus of commentary and debate can be confusing. But there are interesting threads of argument. One such strand was the series of arguments between one “Mango” and Macdonald. Since Mango had appeared in this guise in my web site I was able to track him down. While retaining his 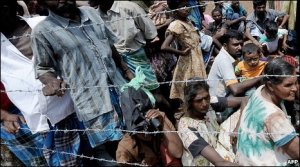 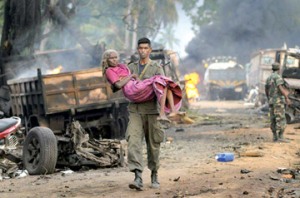 pseudonym for protective purposes, let me indicate here that he is a Sinhalese, lives in Europe and speaks German as well. From his writings and blog comments in various outlets it is evident that he is NOT a Sinhala ultra-nationalist. Moreover, he is a patently well-read and well-informed. I requested him to extract his series of jousts with Macdonald in its sequential time-frame so that the debate could be profitably studied by readers.[3]

This debate has been inserted separately. Deciphering and digesting the discussion will call for infinite patience from readers. This is a marathon bout, toe to toe. Mango and Macdonald are nothing if not assiduous, determined and persistent. Let me assure all of you that a careful reading of thrust and counter-thrust will be quite rewarding.

Since Mango has taken the trouble to extract the discussion, he has the advantage of adding a summary at the start and placing his spin on the position adopted by Jim Macdonald and Amnesty International’s position with reference to Eelam War IV in its last stages and the subsequent placement of the Tamil “civilians” in detention centres for what turned out to be seven months (ending by 1 December 2009, when inmates could move out and return on a chit system – though that was not known when this debate raged).[4]

For my part the greatest benefit emerging from this discussion is the clarification of Amnesty International’s stance. From general knowledge and from a long-standing family friendship with such people as Suriya Wickramasinghe, I knew that AI is well-intentioned. But what strikes me most about the AI policy towards Sri Lankais the manner in which moral adherence to the protection of humanity generates cavernous tunnel-vision. In early 2009 and during the pulsating debate on the AI web site Macdonald’s mantra was “CEASEFIRE.” A ceasefire, he believed, would save lives. So, he keeps shouting “ceasefire, ceasefire” … and directing this principle as criticism of the government of Sri Lanka (GoSL) once the war ended.

This was precisely the line advocated by high-ranking Western politicians such as Hillary Clinton, Bernard Kouchner and David Miliband. This was precisely the programme that I subjected to a scathing criticism in my article “Simpleton’s at the World’s Peak. Sri Lankan situation stumps the World” – which appeared initially under a different title in the Frontline issue of 22 May 2009.[5] This essay is now available in print in my Fire and Storm. Essays in Sri Lankan Politics (Colombo, Vijitha Yapa Publications, 2010, pp. 289-302); with the support of two articles that had preceded it and coloured my reaction, both entitled “Dilemmas at War’s End” and entering the public realm in groundviews.org in February 2009. These essays, incidentally, had aroused considerable antipathy among those whom I referred to as “human rights extremists” (among them several of my friends).

Macdonald does not EVER address the question how one could have installed a ceasefire during the last stages of the war with only one side adhering to this proposal? There is a monumental absence of pragmatism in his insistence on a ceasefire without attention to specifics, a shortcoming that I consider appalling. That is why I have depicted the AI programme as akin to that of witch-doctors chanting a “mantra.” That is why he can be placed among several other spokespersons and agencies in a box, that is, a category, that I have described elsewhere as “Ethereal Space.”[6]

A critical shortcoming in this AI programme was its failure to read the context and its mind-boggling misreading of the LTTE despite previous experiences of negotiations abrogated, with one instance in April 1995 during the Kumaratunga dispensation replicating the Japanese attack on Pearl Harbour in minute-scale and matching the Japanese in Machiavellian duplicity.

As if previous instances of broken promises were not enough, in 2009 itself the various human right agencies clamouring for ceasefire and peace were provided with a classic example when the GoSL declared a ceasefire (implicitly short-term?) in late January 2009. The result has been described in detail by a military analyst in Australia:

“Commencing from February 1-4, the LTTE launched major counter attacks against Task Force 4 and the 59th Division … and forced the SLA to retreat as far south as Oddusudan, some 10 kilometres away.… In the initial attack the LTTE used several Vehicle-borne Improvised Explosive Devices (VBIEDs) to breach SLA defences followed by frontal counterattacks with over 500 guerrillas using a captured T-55 Main Battle Tank and a T- 85 Armoured Personnel Carrier (later knocked out by infantry). The LTTE made immediate territorial gains forcing Task Force 4 and the 59th Division to hastily fallback on their flanks between 1.5-3 kilometres. It took four days of heavy fighting to reduce the LTTE salient with reserves from the Air Mobile Brigade, Commando Regiment and the Special Forces Regiment.”[7]

In brief, the ceasefire cost the SL army casualties that may not have otherwise occurred.

Central to any such comprehension of Eelam War IV and its prospects of resolution through negotiation was an understanding of its leader, the talaivar Velupillai Pirapāharan, something AI resolutely refused to undertake. Macdonald should now read some of the insightful observations recorded by Ben Bavinck in conversation with Rajan Hoole and Daya Somasundaram of the UTHR in the depths of the north in the years 1987 to 1991. Here were men who were wholly conversant with Tamil culture and had first-hand experience of LTTE rule.[8]

Take these two diary entries together:

5 January 1989 in Jaffna [paraphrasing conversation with Rajan Hoole]: “Will the LTTE ever be able to participate with others in searching for a solution? But this was impossible, because Prabhakaran would rather commit suicide than compromise. That this will cost thousands of lives doesn’t matter to him.” (page 50).

21 May 1991 in Jaffna [when news of Rajiv Gandhi being assassinated reached the place]: “My friend thought that the involvement of the Tigers in this murder seemed very logical, taking into account the psychological condition of their leader, Prabhakaran, who is prone to avenge every disdainful or disparaging word or action against him. That’s why Rajani. That’s why so many others. That’s why now Rajiv had to pay the price” (page 181).

While this source was not available to Amnesty International in 2009, there were plenty of dissident Tamils and other sources, in Sri Lanka, USA and UK, who had considerable experience of the LTTE and could have been consulted before AI stepped out so boldly to pontificate on the desirable course during Sri Lanka’s warring moment in early 2009.

Here, then, is a classic case of morally-inspired people without nationality speaking for humanity from a universalist position and in a simpleton manner that is far removed from the practicalities of specific contexts. Albeit in somewhat different vein, Macdonald’s arguments have some similarities with those peddled by Gordon Weiss.[9] This is another instance of morality and secular fundamentalism losing touch with specificity in the course of their quest for universal good.

[1] Among those who were clearly ultra-Tamil were Vanni, Mawatha Silva, Alfonso and Gadin Ran; while Avichara and Jim Pappa represented Sinhala bloggers.

[2] http://blog.amnestyusa.org/iar/sri-lanka-international-investigation-still-needed/. A discerning reader may find some of Macdonald’s responses to Mango quite evasive. This could also be wooliness arising from an unrealistic reading of the Sri Lankan situation in historical depth – which is the crux of my criticism.

[4]. I was in Sri Lanka in May-June 20009 and it was patent to me that the Government would NOT hold the IDPs indefinitely because that was far too expensive and quite counter-productive. I am critical of the government for not easing entry and exit from these detention centres earlier than 1 December 2009 and for the way they handled the media on this issue. The human rights lobby and UTHR personnel objected to the principle of detention as an infringement of rights and as “extra-legal.” It certainly was extra-legal, but so too was the war and the warring context. To focus solely on the rights of the IDPs and to simply shunt out of mind the rest of the population seems quite one-sided. They too had rights of protection. Given the past history of suicide bombing and LTTE organisational capacities, the government was ultra-cautious in protecting (a) itself and (b) the other people of Lanka. I myself thought the LTTE was done for locally, but I would have been hard pressed to convince government personnel on this point.

[8] Note that one of this brave little group, Rajani Thiranagama, was murdered by the LTTE in September 1989 – in fact in between the two selections I have extracted from Ben Bavinck, Of Tamils and Tigers. A Journey through the War Years,Colombo, Vijitha Yapa Publications, 2011, ISBN 978-0-95664 11-1-3.